It was Autumn, 1863. Prescott had not yet been founded. William Bradshaw and a group of men were standing atop a mountain in the “Silver Range” with nothing to see but wilderness from horizon to horizon. Seeking gold and silver, they happened to be walking upon the largest deposit Arizona would ever know.


William D. “Bill” Bradshaw was born in 1826 in Buncombe County, North Carolina. After the family moved to Missouri around 1845, William, Isaac, and two other brothers headed west; first to California and then to Arizona where William opened a ferry service across the Colorado River on June 16, 1862. This was operated by his brother Isaac “Ike” Bradshaw.

William located Bradshaw City in the middle of the rich area as a mining camp in 1863 “on the pine covered north west slope of Mount Wasson," the paper related. "At first there was only a cluster of tents, but abundant timber in the district quickly furnished material for more permanent structures." Stores, shops, saloons, restaurants, and eventually two hotels became part of the town in 1871. Originally the town was meant to be named “Montezuma,” but that was soon dropped in favor of the popular pioneer.

According to the book “Ghost Towns of Arizona,” by James & Barbara Sherman: “Travelers to Bradshaw City could reach their destination through the courtesy of Simpson, an ore packer who ran a weekly saddle train from Prescott. The distance covered was about 30 miles, and according to Simpson it took 2 1/2 days to reach the mining camp. An alternate route to the town involved arriving at Minnehaha Flat by wagon road from Walnut Grove and then climbing a steep 5 mile trail.”

In July, 1864 William ran for Delegate to Congress, but lost to Charles Poston.

ALSO ENJOY: The Lost Ghost Town of Zonia
The founding and early history of the lost mining town of Zonia, AZ.

On September 14, 1864, a meeting of miners was held and the Bradshaw Mining District, covering 10 square miles, was established ”in honor of the Bradshaw brothers, who brought the region to notice last autumn,” the newspaper reported.

Unfortunately, less than 3 months later, William Bradshaw was dead. He was not in the best of health and he was purportedly a heavy drinker, but neither of these would cause his demise. On December 2, 1864, he was found dead with his throat slashed in La Paz. Newspapers reported that it was a suicide, but considering the lack of witnesses and how much gold prospecting (literally) can be a “cut-throat” business, many historians wonder if he was actually murdered. Bradshaw was well regarded and his untimely loss mourned.

Brother Isaac took over the mining affairs, and it was thought Bradshaw City would become the most important municipality in central Arizona, surpassing Prescott.

The largest mine to be served by Bradshaw City was the Tiger. “Captain Hargrave pronounces the Tiger, the largest and richest ledge he has ever seen,” the paper reported, “and says there are a dozen other mines nearly as good.”

By April, 1871 Bradshaw City was being plotted “a little north of the divide, above Poland’s cabin, in the midst of a fine growth of pine timber, and with a plentiful supply of the purest water from large springs which bubble out of the everlasting granite,” the paper described. “The point is well chosen;…town lots are 25x120 feet. Sixty are already taken.”

Two stores were already in operation; one by Davis & Sheckel, another by Collier & Beardslee, There was a restaurant, a saloon and an assay office. Also being constructed were a smelting furnace and a mill. The Silver Summit Hotel advertised that it was happy to receive payment in “money, free gold rock, native silver, any colored sulphurets, or argentiferous galena.” 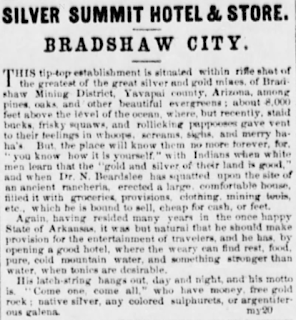 Soon Davis & Shekels mercantile opened which offered “Eatables, Drinkables, and ‘Wearables.’” Another general merchandise store was opened by Miller & Hussey in 1872. They advertised being “ever opened…and are selling cheap for cash.”

It seemed Bradshaw City would continue booming, but the good times would not last for long. The minerals market took a hard hit, and in 1876, 14 years after its founding, Bradshaw City was reduced to “some 25-30 buildings—all vacant, except the one occupied by Chas. Koutz, the (Postmaster) of the city,” the paper reported.

When the market recovered, Bradshaw City's central location in the Bradshaw district made it a good place for visiting businessmen to lodge and board. As a result the Capital Saloon & Restaurant opened to serve that market.

By 1890, the minerals market was in full sign again, but Bradshaw City would never recover. Byrd Granger’s book “X Marks the Place,” declares that there were up to 5000 residents in Bradshaw City at its peak. Not to doubt his finding, but newspaper reports during that time offer no account of the population growing that high.

In July, 1871, a reporter for the Arizona Citizen in Tucson visited Bradshaw City and reported that it had “20 houses, perhaps, summer finished.” Twenty-five years later, an Arizona Republican reporter wrote: “The famous old Tiger mine which is situated near the loop claims in Yavapai County, was in early days the center of one of the liveliest camps in Arizona. About a quarter of a mile above the mine was a little city called Bradshaw City, which was a very prosperous place with a population of 1000 souls. Today not a soul remains and the old houses have either crumbled to ruins or have been removed.”

Today a Forest Service sign marking the location is the only thing left of Bradshaw City. Some say that a few spotty foundation ruins could still be seen, but others have not found them at all.

Still, the Bradshaw name lives on.

CLICK HERE for all the Prescott AZ History "Story Behind the Place Names" Articles!
At this date, 39 towns and places are described.