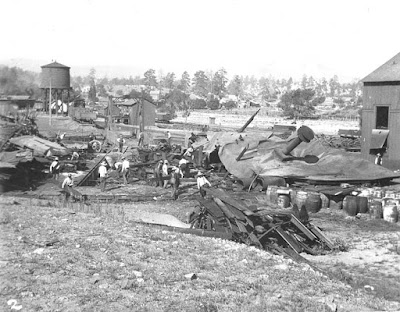 It was nearly 3:30 pm August 17, 1909 when engineer Joseph Reese put his hand on the throttle, and Engine No. 11 began to pull a heavy six car passenger train out from the Iron Springs Depot. Little did he know he was a mere two minutes from disaster.

“With a roar that could be heard for miles which echoed and reechoed in the mountains like the crash of heavy thunder,” the Journal-Miner related, “the gigantic boiler on the big mountain engine pulling the passenger train up a heavy grade let loose, catching the unfortunate trainmen in the cab. Scalding steam escaping from the rear of the boiler poured over [fireman JH] Wolfe and [telegraph line inspector FE] McCrea, injuring them in a terrible manner.”

The firebox door blew-out, striking Wolfe in the leg, breaking it in two places. Despite his painful agony, he was still able to jump from the train. McCrea had been sitting outside the cab watching the telegraph poles go by. He “was hurled from the engine after he had been covered by steam. Engineer Reese was hurled through the cab window and was picked up unconscious.”

Fortunately, the main force of the explosion was kept to the boiler and the engine itself. Aside from having their nerves completely frayed, none of the many passengers were injured. Dr. John W Flinn was a passenger on the train when the blast occurred. “With the other passengers, he rushed to the front to ascertain the cause,” the paper reported. “When the seriousness of the accident was learned there was great excitement among the passengers. They were soon quieted, however, and the horror of the scene soon gave way to cool and prompt action.”

“The linen from the Pullman was ripped out and torn into bandages, vaseline and oils in hand bags and suitcases and other necessary articles that could be used to apply to the wounds of the men were contributed by the passengers. One woman even had some medicated cotton which was used in dressing the wounds.”

“The physician [said] it was certainly pleasing to find so many people to volunteer anything within their power, and to the crew of the train, he [gave] high praise,” the paper said.

Back at the Iron Springs depot, US District Attorney JLB Alexander witnessed “a big puff of smoke…and then [he] was convinced what was the matter.” He along with others began walking down the track to the scene of the accident.

Meanwhile, news of the incident “was flashed to Prescott in a twinkling and within a quarter of an hour, a relief train carrying Vice President Drake, company surgeon McNally and other officials was hastening to the scene of the accident at record speed,” the paper detailed. “Defying death, the daring engineer sent his train carrying aid and succor for his injured comrades rocking and swaying around sharp curves on the mountain track at a rate of 30 miles an hour…[making the] eight miles in 15 minutes.”

The injured men were quickly taken back to Prescott where the special train stopped as close as it could to the hospital. Drs. Flinn, McNally and Southworth and “the able corps of nurses and sisters attached to the hospital” administered over 40 hours of medical attention.

“The scene was a pathetic one in the extreme,” the paper stated. “The deep moans of the injured and the frightful burns McCrea and Wolfe bore told only too plainly the fearful story of the accident that took place.”

The story of what was at the time the worst train wreck in the history of the Peavine Railroad.

“Wolfe, the fireman of No. 11, was the first to receive medical attention, his wounds being of a frightful nature,” the paper described. “He [was] a mass of burns from his head to his lower body, in addition [to the compound fracture.] He received the full impact of the explosion and the full force of the steam struck him. His broken leg [was] attributed to the door of the firebox being blown off and striking him above the knee.” It was broken in two places. His chest and arms also received the full head of steam that escaped," the paper related.

“Many tears were shed as his wounds were exposed. The flesh was torn from his head and chest and lacerated lines were shown everywhere. His cheek and eye were gashed and his body was scalded. He was moaning incessantly,” and suffered in this agony for seven and a half hours before passing away.

Wolfe “was a young man, age 25, who had been employed at the railroad for 6 years.” He was "the principle support of his father, [and] a brother and sister.”

McCrea’s wounds were  “of the same ghastly character as Wolfe’s, but [were] not considered as serious.” Doctors hoped that he would recover. Nevertheless, he “sustained serious burns and his sufferings were intense,” the paper declared. “When the explosion occurred, he was sitting in the gangway between the engine and the tender inspecting the telegraph lines as the train was speeding along. He caught the full force of the steam at points on his chest and head and was lifted in the air and thrown into a cut on the grade several feet from the engine.”

McCrea seemed to be doing reasonably well, but a week after the explosion, “he suffered a sudden sinking spell…and failed to recover,” the paper stated. McCrea was 25 and married. His wife had an “intuition…that an accident had occurred and that her husband was one of the victims.” The couple had also recently lost an infant child.

“Joseph Reese, the engineer, was sitting on his box, and in that position was not in line of the escaping steam and the flying fragments of iron and steel,” the paper described. “By the force of the explosion he was hurled several feet” through the cab window,” and badly stunned. “[He] was said to have acted heroically when he recovered his senses after the explosion and brought all his physical powers into action. Later, however, he collapsed, and for a long time did not seem to realize anything.”

His shock was intense, but it was found that he had suffered no internal injuries. Miraculously, he was out and about after only a few days.

When engine No. 11 was brought back to the yard at Prescott, it was found “that the crown sheet was blown from its position and fell into the firebox below. It was a mass of shriveled up steel, 14 feet long by about 5 feet across, and show[ed] the terrific force that was behind it when it was ripped off its position,” the paper proclaimed. “Every bolt with the exception of a few at the end was torn away. As strange as it may seem, nothing in the equipment of the engine in the cab room was injured, except the glass tubes and the lesser attachments on the many valves.”

There was no NTSB to determine the cause, but it was assumed that the calamity occurred when the water in the boiler became too low. “In speaking of the accident,” the paper concluded, “Reese says that at the time of the explosion he had his hand on the throttle, and that there was not the least warning that anything was working improperly in the machinery, that if anything was wrong his hand would have instantly detected it. He remembered but one thing, and that was when the shock was felt, he was going through the cab window.”

#PrescottAZHistory publishes a new article every other Sunday. Follow the blog in one of the following social media to be sure you get the latest article!