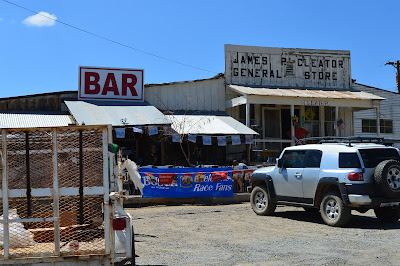 
"In 1864 the Turkey Creek mining district was organized and by 1869 the (silver) miners had petitioned for a post office. There was a stage station here around which a community developed." (*1)

An 1871 Arizona Miner article reported: "The nucleus of a settlement has been started on Turkey Creek, about midway between Prescott and Bradshaw mines. Two men have recently gone out there and established themselves as station-keepers." (*2)

Enter a man named James P. "Jimmie" Cleator, who arrived to mine in this area of the Bradshaws in 1900.

"He was born on July 12, 1870 on the Isle of Man. He (said) he went through the sixth grade at school and thought he knew it all." He spent his teen-age years working on merchant ships before emigrating to California.  "In 1898 he cleaned up $10,000 from a lease on a gold mine" before heading to Yavapai County, Arizona. (*3)

"In 1902 the railroad was building from Mayer to Crown King and (the depot of) Turkey Siding was established where the town...now stands. Lev Nellis started a store and saloon" there. (*3) 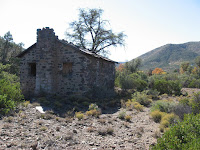 ALSO ENJOY: The Forgotten Ghost Town of Placerita
The colorful history of the ghost town of Placerita, AZ and it's founder, Anson Wilbur "Old Grizzly" Callen. It's a story of gold, goats, and killings.

Meanwhile, Jimmie Cleator continued to grow quite a nice nest-egg mining until he realized that eventually, just like in California, the mines would play out. Before that happened "Cleator came into (Nellis') store and wanted to buy into the business. Lev sold him a half interest on January 1, 1905 and for several years thereafter they remained in business together, at the same time building up a bunch of range cattle." (*3)

After 10 years as business partners, Nellis found that he enjoyed the ranch life best, while Cleator enjoyed running the shop. So in 1915 Jimmie traded "his ranching interests for Nellis' interest in the town plus $2500." (*1)

"In the earlier years there were quite a few tough characters in that region. One day a prospector came into the store half drunk and started an argument in which he pulled a gun on Jimmie. 'wait a minute,' said Jimmie and while the fellow hesitated Jimmie jumped over the counter, knocked him down and took the guns away from him." (*3)

"The fellow then ran out of the store, went to his cabin and started back after Jimmie again (this time) with a rifle. Just then Lev Nellis rode up, heard the fellow cursing Jimmie, and took the rifle away from him. The matter was later settled peaceably." (*3)

"The mines were going full blast in those days and properties like the Crown King and Peck produced millions of dollars worth of silver." (*4)

Then in 1920 the US Postal Service wanted to change the name of the town (Turkey) because it was causing confusion with the post office at the settlement on Turkey Creek. Cleator decided to name the town he owned after himself. The post office eventually closed July 15, 1954.

"Cleator ran the post office and general store for many years, as the community continued to serve such mines as the Desoto, the Silver Pheasant, and the Swastika." (*5)

Eventually the mines did play out. "By 1933, the railroad was abandoned (and) Cleator was fast becoming a ghost town." Today the old railroad right-of-way is the one and only road in and out of town. (*5)

Even so Jimmie remained devoted to his town even becoming a member of the district school board after previously donating one of his own buildings for that purpose. (*6)

In 1937 he "advocated construction of a special building for school purposes" and the WPA employed 20 men for two months to complete the job. (*6)

In 1949 when Jimmie was 78 years-old, national news was made when he put the town (minus the school) up for sale. "Many prospective purchasers and many 'just curious' persons, drove in by auto to inspect his store, post office, saloon, the houses and cabins, the waterworks, mining claims, etc., but for some reason a sale was never made." (*3)

Ultimately the town remained in the hands of the family. Jimmie's son, Thomas, bought the town from his father and lived there until his passing in 1996. It was then left to Thomas' sister and her son.

CLICK HERE for information on the "Cleator Bar and Yacht Club"