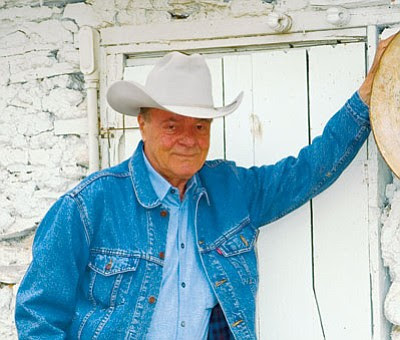 "In 1938, Johnie Lee and Norman Fain brought the newborn Bill Fain, the fourth generation of the ranching family, home to Yaeger Canyon, at the base of Mingus Mountain." (*2)

"Love and respect for Arizona and the land had deep roots for Bill Fain. In 1874 his great-grandfather William Marion Fain settled in what is now the Verde Valley. His grandfather, Granville 'Dan' Fain, was born on a Cornville cattle ranch in 1879. Bill's father, Norman Fain, was born in 1907 on a ranch in Camp Verde. Norman Fain married his Prescott High sweetheart...and ten years later...Norman W. "Bill" Fain II was born. By then, ranching was as natural to a Fain as breathing. Bill was riding horses on the ranch at the age of 3 and learned the cattle business from his dad, Norman, and his grandfather, Dan." (*3)

“As a child, I probably was closer to my grandfather then to my dad,” Bill once said; “Dad was in the (state) Senate from the time I was 3 until I was 9 and he was away a lot on other business during my early years.” (*4 pp108-9)

"When (Bill) was a student at Prescott high school, and even before that, he would have to be gone four or five weeks each fall to help with the roundup." (*4 pg110)

“'But I like working cattle,' (Bill once) said, 'and I really didn't miss much schoolwork. Mother always brought my books and assignments to me and dad sometimes rode beside me and drilled me on my lessons.'” (*4 pg110)

"From his high school days, Bill Fain had nourished a dream of someday developing a town in Lonesome Valley. A friend remembers when as a teenager, Bill declared “Someday this valley will have more people than Prescott!”  (*4 pg126) 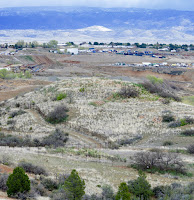 "Highway 69 (had) just been completed from Interstate 17 to Prescott and passed through Lonesome Valley. It opened up that area to possible urban development." (*5)

"At the University of Arizona, (Bill) wrote a paper on the developmental possibilities of the area, and repeated the same prediction." (*4 pg126)

While in college, "Bill met the love of his life, a coed named Nancy Lee Williams. An innocent conversation about Cinco de Mayo led to romance and in 1960 the couple married and returned to Lonesome Valley." (*3)

"After he returned to Dewey from college, he asked his finance professor to buy a copy of every book in the U of A bookstore concerned with land use, planning and area development and send it to him. The knowledge he gleaned from those volumes...stood him in good stead for more than three decades." (*4 pg126)

"Over the next nine years, Bill and Nancy had four children: Norman III, Dawn, Ron, and Brad. Although only in his twenties, Bill began to craft his strategy to create the Town of Prescott Valley. Fully realizing that a community needs jobs, industry, and affordable housing, Bill began with the fundamentals. And in Arizona the first building block is water. In 1965 Bill organized the Shamrock Water Company which 35 years later became the municipal water source for the Town of Prescott Valley." (*3)

"In 1964, Ned Warren, the self-proclaimed 'Godfather of Arizona Land Schemes,' approached Norman Fain. Ned proposed development in Lonesome Valley. After initiating negotiations, Ned left for Kingman to engage in a similar deal and placed the company in the hands of Robert Loos and Leonard Hoffman. These two formed 'Prescott Valley Inc.,' and began peddling the property across the country." (*5)

Perhaps largely due to the gravity, presence and reputation of the Fain family, Ned Warren did not attempt any shenanigans in Prescott Valley whatsoever.

"Promising 'you'll live in the sun in Prescott Valley,' Prescott Valley Inc. took it's message to the midwest and northeastern states. They offered a steak dinner and showed pictures of Prescott, the National Forest, area lakes, and ranches. They were able to convince attendees to purchase property sight unseen, and sales were fairly brisk." (*5)

"Property owners were invited to visit the new community to view their purchase. A motel and dining room were built to accommodate these visitors. They were also treated to a tour of the surrounding points of interest. Upon viewing their property, dissatisfied owners were given the options of trading their lots for a more desirable location or receiving a return of their payments. In some instances,  these visitors not only approved of their purchase but bought additional lots. Prescott Valley Inc. and its staff were intent in satisfying the needs of their new residents." (*5)

"Bill implemented the next piece of his community strategy by working with government and private partners to attract businesses to the region. Businesses meant jobs for the families of the growing town. Soon companies such as Better Built Aluminum, PrintPak, the ACE Hardware Retail Support Center, Hensley Distribution, Canyon Distributors, Superior Industries, and Mountain Valley Rehabilitation had located to Prescott Valley. With jobs and homes growing rapidly, a retail sector was next on Bill Fain's vision for the thriving community. What followed were the successful Safeway Shopping Center, Fry's Neighborhood Shopping Center, and the Glassford Hill Marketplace, home to the Walmart Super Center and Kohl's. Next came a Hampton Inn providing a place for visiting relatives, tourists and business professionals." (*3)

Over the years, "Bill Fain was instrumental in donating land to Prescott Valley for many town projects and ventures. In fact, the Fain family has made contributions to the community since William and Cary Fain arrived in Arizona in 1874." (*1)

"Among these gifts of land are:

• One section (1 square mile) for the airport near Prescott.

• 100 acres for Fain Lake and Park; (which includes the Fitzmaurice Ruins)

• 20 acres for the PV Civic Center, Library and Police Station.

• 4.5 acres for a police shooting range.

• Use of property for the PV Community Gardens and the radio-operated racetrack." (*1)


"By the mid 1990's, the Town of Prescott Valley was taking shape and land donated by Bill would soon become the site of the new city hall, public library, and police station. However, Bill's vision was not yet complete. Working with innovative partners in the community, Bill set out to build a central entertainment district and to bring a hospital to Prescott Valley. Opening in 2000, the Entertainment District complex offered a state-of-the-art Harkins Theater, shops, and restaurants." (*3)

"Bill Fain was the embodiment of the American dream. He loved his country; he understood his roots were in the land; he believed in personal responsibility; and he recognized anything was possible through hard work." (*3)

Some cynics feel that the Fain family has needlessly held on to land they don't need. However, there is a reason for this.

"We made the decision not to sell land for speculation. We sell it to the user. It's satisfying when people feel like (Prescott Valley) has become their home. That was our objective, and it still is," Bill said. (*2)

"After fifty years of dedication to a single vision, Bill Fain was asked how he wished to be remembered. As always his answer was short and simple: "I wish to be remembered for my integrity, my efforts, and for providing opportunity." (*3)

A year before his passing it was announced that Prescott Valley had officially grown larger in population than her older sister Prescott. One of the youngest towns in Yavapai County had quickly grown to become its largest! Bill Fain was able to witness his prophecy come true! (*6)

"Bill may be gone from this earth but he has given a gift to us and to future generations. That gift is the realization of his life-long vision, to create a town where there was none and in the process he left us a wonderful place to live, raise a family, and retire. As Robert South said: 'the truer measure of a man is by what he gives.' Thank you, Bill, for giving us your dream." (*3)


CLICK HERE for a listing of all the
Prescott AZ History Biography articles!