She then set sail for Florida to conduct "shakedown training" out of St. Andrews Bay. "This involved two weeks filled with drills of every description ranging from firefighting to abandon ship and from gunnery to beaching exercises." (*2)

After passing her tests, she then sailed for Guantanamo Bay on the way through the Panama Canal and off into the Pacific theater. (*1)

On the way, LST-676 took on board 105 army passengers for transportation to the west coast and discharged them at San Pedro, Calif., on September 1st. She then sailed for Hawaii and arrived at Pearl Harbor on the 14th. (*2)

Originally LST-676 was a landing ship that could carry heavy equipment straight to the beach. But after "lifting a detachment of marines and their equipment to Hilo, Hawaii, (she) returned to Pearl Harbor on 2 October to moor at the Waipio Amphibious Operating Base at West Loch." (*1)

Like several other LST's, she would go through a refitting to become an LST(M)--a "floating barracks" and "mother" ship. (*3)

While the large capital ships had a great deal of storage for food, fuel and their own fresh water distilleries, small ships like "LCI's, LCT's, SC's, PC's, PCS's and YMS's...needed fuel, water, and provisions just like the larger ships; and thus specialized ships for supporting them were needed, too." (*2)

"Still another large group of small craft needing support were the LCM's and LCVP's left behind when their transports sortied on night retirements from the beaches. The idea of a barracks ship came, apparently, from Capt. Stanley Leith, operations officer for Commander, Amphibious Forces, Pacific Fleet, Vice Admiral Richmond K. Turner. When Leith suggested to Turner that LST's be converted to serve as 'mother ships,' the admiral readily agreed, and a program to make these changes was promptly launched." (*1)

"The landing ship underwent the conversion to a self-propelled barracks ship of the Benewah (APB-35) class. Sixteen large refrigeration units were installed, as was stowage for dry provisions. Berthing space was provided at the after end of the former tank deck. One quonset hut was added topside to provide a wardroom and quarters for transient officers and another was erected for a bakery and galley. Besides those main deck structures, the ship received portable distilling tanks to produce fresh water and several storage tanks for it." (*2)

The usual duty for the newly refitted ship was to obtain fuel and food from a larger resupply ship and in turn, resupply the smaller ships with that food, fuel, and fresh water. 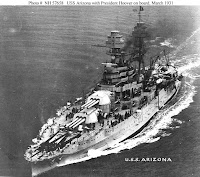 
She could now also berth 40 officers and 300 enlisted men providing a relatively safe place for them to get a good night's sleep away from the artillery shells and small arms fire of the battlefield. (*3)

On January 24, 1945, she set sail for Iwo Jima arriving the day after the invasion. The Iwo Jima campaign was the first time these "floating barracks" were utilized. The newly fitted ship proceeded to an anchorage about one-half mile south of Mount Suribachi—the scene of the famous flag-raising —and soon began tending the assault boats carrying men and equipment to "Green" and "Yellow" beaches." (*2)

"During the ensuing 10 days of the operation to capture Iwo Jima, the converted LST fed 3,499 men and berthed 2,307; LCI's, SC's, and LST's took on a total of 76,527 pounds of fresh and dry provisions, 37,250 gallons of water, and 89,334 gallons of fuel oil. Even after the island was considered secured, (she) remained in the vicinity, taking part in the occupation and garrisoning of the island and furnishing logistics support for the ships and landing craft in the area." (*1)

After doing all that was asked of her at Iwo Jima, she retired to Guam for repairs where she received word that she had been re-designated as APB-42 and given the name U.S.S. Yavapai. (*4)

While at Guam, she effected repairs and set sail for Okinawa in late June. "Yavapai arrived at Okinawa almost at the height of the campaign. Called upon to take over the function of provisioning small craft, Yavapai anchored off the Hagushi beachhead to proceed with her vital duties. During daylight hours, the ship provided logistics support to ships and small craft; at night, she manned the antiaircraft batteries against the almost ever-present Japanese raiding aircraft." (*1)

"Some 556 ships came alongside during the days Yavapai spent at Okinawa and, when the end of the war came in mid-August 1945, she was still at Okinawa, performing her 'over the counter' logistics function there." (*1)

The Yavapai received one battle star for her World War II service. (*2) 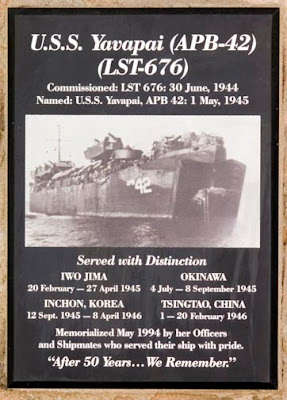 Her next action occurred during the Korean Conflict in "Operation Campus"--"the occupation of the southern half of Korea. Arriving at Jinsen, Korea (later known as Inchon), Yavapai provided food, fuel, and water; "mothered" a 300-man boat pool; and acted as station ship for their activities." She spent two tours in this action. (*1)

Her last active service occurred in China where she served two tours at Tsingtao, China from February 1st-20th, and April 9th-14th, 1946, before she sailed for the United States. She went back through the Panama Canal and arrived at the Charleston (SC) Naval Shipyard on June 20th. (*1)

She was decommissioned on December 3rd, 1946 and placed in reserve. "(She) remained in that status into the late 1950's before being struck from the Navy list." (*2)

Although not "flashy," support and logistics in warfare is absolutely essential. Without ships like the USS Yavapai, the battle could not be maintained and the war could not be won.

Everyday is a good day to thank a vet. Here are a few of the navy men who served on the USS Yavapai...
THANK YOU VETS!

William Bill Alderman
Santino J Lentine
Guy Moody Lyons was a Lieutenant JG
Richard Warden was a Motor Machinist Mate II.
Frank Gibson: He served as the ship’s physician aboard the USS Yavapai in the China Sea.
William Guerrant, Petty Officer 3rd Class
Jack Kellan Hudson
Napoleon Ross "Nipper" Tiddark: Nipper's Indian name was "Numi-Tekwa-Ku- Esah" which means Talks for the People. He is the only known member of the Comanche Nation to serve in three branches of the service.

SaveSave
Posted by Drew Desmond at 8:22 AM