About four miles east of Bumble Bee lies Bronco Canyon.  In the 19th century, two miners found a rich vein of gold quartz. They extracted $80,000 in gold, "hiding it under a large rock near their camp." However, a party of Apaches attacked them, killing one, while the other managed to escape. (*1)

Understandably weary, the surviving miner did not desire to return to the site until the Indians had been subdued. But before he could make the trip back, he fell ill and eventually died. But before his passing, he related his story of the gold and the attack. (*1)

The campsite was found by a Mexican sheepherder, but he was ignorant of the treasure and did not investigate. Other people have reported seeing a crude arrastre there, but the mine and buried treasure have yet to be found. (*1)

Oscar was a recluse miner living in McCabe.  He buried his earnings near his cabin there. (*4)

$75,000 in gold bars is buried in the Bradshaw Mountains somewhere in the vicinity of Prescott. (*4)

The Treasure of Zonia:

A large booty consisting of bars, bullion, sacks of Mexican gold and silver coins and some church treasure is buried in the vicinity of Yava between Kirkland and Hillside on Hwy. 96. It has never been recovered. (*3)

"In 1864, miners struck a rich placer of gold on Lynx Creek finding about $30,000 in nuggets.  They packed it in 5 buckskin pouches. Between Lynx Creek and Prescott, the party was attacked and killed by 2 Indians who took the gold and headed for the mountains. Within 3 hours, a posse was formed and about 10 miles from the scene of the attack, they overtook and killed them. However, the posse did not find any gold and they believed that it had been buried or hidden somewhere enroute by the robbers.  It has yet to be found." (*3)

This treasure is located somewhere near the canyon named after him. (*4)

The Lost Ledge of the Lone Ace Desert Rat:

This treasure is located near Skull Valley, northwest of Prescott. (*3)

A 19th century African-American, known to his contemporaries as "Nigger Ben," "left an inheritance for this and generations to come to 'rustle' for in the shape of a mountain of gold said to be covered up somewhere near Wickenburg, and which is said to lay gracefully in the shade, the wealth of El Dorado." (*3a)

Ben died in Prescott in 1865, and although it was supposedly Ben, himself, who told the story, the account never surfaced until three years later. Still, "prospectors...persist in trying to solve (the mystery) in a vain attempt," the newspaper reported. (*3a)

The 11/3/1900 Prescott Evening Courier printed a letter in which a man from Cripple Creek, CO wrote the newspaper inquiring about the "Negro Ben" mine. His story was that Ben was kidnapped by Indians "a few days and (they) showed him a great deposit of gold quartz and gave a sack of the quartz to the negro and turned him loose, which he brought back to Prescott..." The writer wanted to see a sample of the ore and was "willing to spend some good money to find the lost wonder." (*3b)

A.W. Preston, son of Silas D. Preston, came to Prescott in August of 1915 to fulfill his father's last wish to locate a lost treasure east of Gillett(e) (which was a former stage stop and milling operation for the nearby Tip Top mine.)

The origin of the treasure started with the robbery of a mail stage decades earlier.  It was thought that the robbery was the work of the Apaches who later dumped the booty while being pursued by the 6th Calvary. (*2)  The extra weight of the stash was slowing the Indians down, it was thought, and they were more interested in the whites losing it then keeping it for themselves anyway.

The lost loot included the entire payroll for all the military in Yavapai County as well as a reported cache of gold.

Silas Preston was a member of the 6th Calvary when it was in pursuit of the robbers and he believed enough in the story to purchase equipment and hunt for it.  Later, on his deathbed, he insisted that his son take up the cause. (*2)

Thomas D. Long, also of the 6th Calvary at that time, also believed the legend, making five separate trips to search in the locale without avail. (*2)

At his son's arrival in Prescott, many long time residents remembered the incident.  A mailcoach making its way from Ft. McDowell to Ft. Whipple was robbed near Gillette.  The robbers travelled northeast from the point of the robbery until the trail got cold. (*2)

The question of what happened to the treasure is unknown. Some people thought that it was Mexicans who robbed the stage and they spent the money, but Preston insisted that it was Indians that took the money having followed their moccassin tracks from the site himself.

Were the Apaches responsible?  Where might they hide such a thing?  According to Preston and Long, the truth (and money) is still out there. (*2) 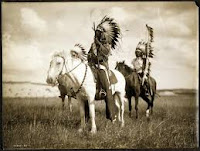 "In the 1800's, a party of successful prospectors were returning from the Big Sandy River to Prescott with a considerable amount of gold dust and nuggets contained in canvas bags. Stopping at the Granite Dells for water in a spring that was located down in a ravine, they were attacked by Indians. The gold was hastily buried near the spring as the battle went on. All of the men were killed except one who made good his escape. The lone survivor returned to the site on several occasions with a search party, but they never found any signs of the gold cache. It is surmised that the Indians dug up the treasure and reburied it somewhere else in the same area." (*3)

During 1864, miners struck a rich gold deposit on Lynx Creek worth about $30,000 in nuggets. Indians killed the miners, took their gold and hid it. (*4)

A miner being followed by hostile Indians buried a chest containing some $100,000 in gold under a boulder shaped like kneeling man. The site was near a spring at the foot of a mountain that flowed into a small valley near Prescott. In a tree a few feet away, he marked a cross above a half circle. This cache of gold has never been recovered. (*3)

The Lost Silver of the Dead Apaches:

A treasure known as the Lost Silver of the Dead Apaches is hidden in the Bradshaw Mountains. (*4)

Another lost treasure near the Gillette area revolves around the blacksmith of the town, Henry Seymour, who robbed three stagecoaches to the tune of $69,000.  After using some of the stolen loot in a poker game, people became suspicious and later caught Seymour as he attempted to rob a fourth stage. (*1)

Seymour was then sent to prison, never revealing where he had hidden the loot. After he was released from prison he dropped from sight and allegedly never returned to Gillett(e) to recover his treasure. (*1) 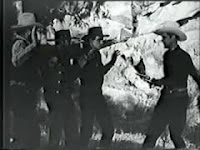 The stongboxes of at least 2 stagecoach robberies are believed buried somewhere on the slopes of the Granite Mountain National Monument. (*3)

While being pursued by lawmen, two Mexican outlaws hid $30,000 in gold along Weaver Creek near Stanton. (*4)

An early resident of Chino Valley is believed to have buried a large quantity of gold coins and nuggets somewhere in or near his cabin before he died. His treasure has never been recovered. (*3)


Although tempting, some of these buried treasures are located on federal and private lands and are not accessible.  These legends have remained hidden for many years and looking for them can be dangerous and illegal.

It's best to leave the treasure hunting to the professionals.

If you enjoy off-roading and ghost towns...