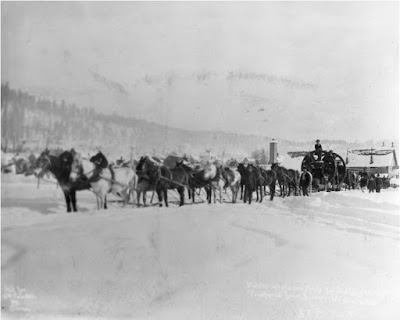 Sam and Jake Miller were two of the very first whites to lay eyes on the Prescott area when they arrived with the Walker Party in 1863.  But unlike the other members of that party, the Miller brothers stayed.  Had they not, the history of Prescott would have been much different and much shorter.

Imagine if "Prescott" was remembered only as an attempt to settle the area; an experiment that failed after only one year due to starvation and an Apache blockade of the town.

This could have very well been the case had it not been for the Miller brothers' nerves and the business they started in Prescott's earliest days.

President Taft's special train was "drawn by two engines looking as proud as shining machines of brass and steel can look."  As the train pulled into the Prescott depot,  "there was tremendous cheering while the band up the street vigorously played "Hail to the Chief."

Prescott planned long and hard to make it the perfect visit and the Queen City of Arizona accomplished just that.


There was much talk and excitement when Goldwater & Bro. first started building their new store in 1875.  It would take two years to complete the two-story brick building.  But in a time when most business establishments were 500 to 1200 square feet, this new "mammoth" store was 3600 square feet.

Attached was a frame warehouse for bulk items that provided an additional 1200 square feet making the 4800sf establishment four times bigger than most other stores!

The Goldwaters' were successful general store proprietors for 15 years in Arizona before they opened the new store.  The Arizona Weekly Miner of January 19th, 1877 predicted "the future financial success of this enterprising firm."

Indeed, the Goldwaters would operate a store in Prescott for many decades to come.

Read more »
Posted by Drew Desmond at 1:49 PM No comments: