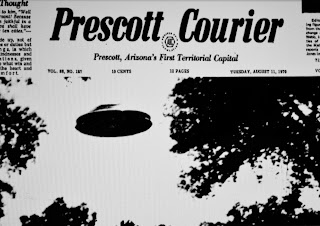 It all started when a 7th grader named Dick Zabriski looked up into the night sky and saw an object that according to him, "seemed to stand still within a column of four stars and then it started to move (erratically)...It changed colors from red to blue then to green." (*1)

This incident would be only the beginning. Soon the town would be abuzz over a massive wave of UFO sightings and the curtain would be raised for the most bizarre event in Prescott history. 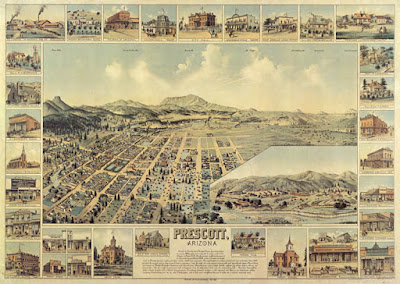 By 1910 it seemed that Prescott was the only city of appreciable size in Arizona that did not have a Chamber of Commerce. There had been attempts before, but they ended up dissolving due to factional differences. But now the situation was becoming acute, if not embarrassing.

"Even the town of Parker had such an organization," the Journal-Miner grumbled, "and it has sufficient influence to cause the government to consider seriously throwing open the lands of the Indian reservation for settlement." (*1)

However, this time the Chamber would meet great success. For it not only included Prescott's businesses, but the involvement of her citizens as well.

Read more »
Posted by Drew Desmond at 9:45 AM No comments: 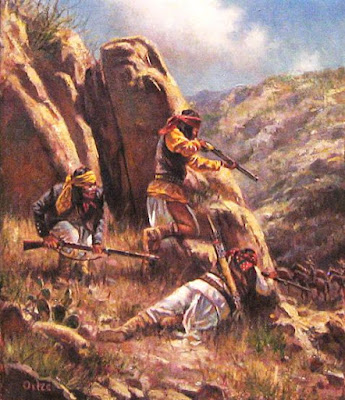 Originally the wagon trail going through Bell's Canyon was meant as an alternate route from Kirkland to Date Creek. However, the topography of rock outcroppings and the need to go slowly over the extremely rough road made it the perfect place for angry Indians to ambush weary whites.

Indeed the area would become so notorious and so avoided that the anglos eventually allowed it to melt back into the wilderness. Today there are no roads going to Bell's Canyon.

Read more »
Posted by Drew Desmond at 8:17 AM No comments:


Monsoon floods of 1911 had cut a new wash through the farm that Peter Marx had been working since 1870. By chance, this new cut exposed some bones sticking out of its bank. Marx went to investigate and quickly unearthed a large leg bone about twice the size of a human's.