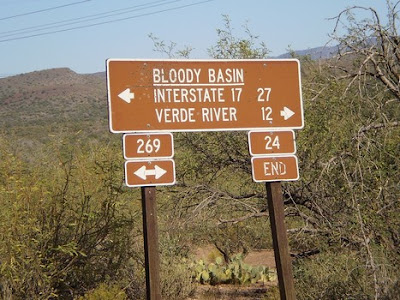 The Traditional Story of the Massacre:

"In early March, 1873, a band of Tonto-Apache attacked and killed a party of 3 Whites, killing all 3, but torturing one before he died. (*1)  According to Maj. Azor H. Nickerson, "They...took him up to a sheltered spot among the rocks, stripped him of his clothing, tied his hands behind him, fastened his feet together and commenced to torture him by shooting arrows into his naked body, taking care not to hit a vital spot." (*2)

"The atrocity spurred a punitive expedition under the specific command of Capt. George Randall, and the general command of General George Crook." (*1)

Publicly, the army said that they were after the Tonto-Apaches. Practically, they were not going to be too particular when it came to tribes. They thirsted for revenge and any "red man" would do.

Eventually, they came across a group of indians at Turret Peak. The indians were cooking mescal and deer and preparing for a celebration.

The soldiers were ordered to quietly crawl to a position directly across from a cave that the indians were living in. "At dawn they attacked. The Natives were so taken by surprise that they panicked, many of them jumping off the mountain precipice to certain death below. Those who resisted were quickly killed or surrendered...Estimates run between 26 and 57 Indians killed, with many more injured. No soldiers were killed." (*1)

Thrilled by this "victory" against the Tonto-Apaches, four of the soldiers were awarded the Medal of Honor.  (*2) 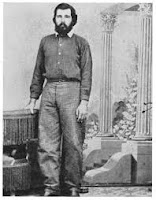 However, can we be sure it was Apaches that were killed at Bloody Basin as most historians state?

The idea that it was Apaches can be traced back to a March 29, 1873 newspaper article that first recorded the killings as told from reports by the army. The story's title was "Cheering News From Gen. Crook's Troops" and relates that "Major Brown's command...captured eight women. The women said their warriors had just returned from a raid, in which they had killed three white men. This, undoubtedly, was a portion of the band which killed (the 3 men)." (*3)

This purported "confession" by the indian women is as dubious as it was convenient for the military. During those horrid times of racial cleansing, it was common for the army to shoot first and ask questions later.

In fact, Turret Peak has always been a part of Yavapai ancestral lands and according to them, it was Yavapai people that were massacred there. What's worse, they were innocent, "friendly" Indians!

The Yavapai Story of the Massacre:

When the whites first appeared in the lands of the Yavapai, their chiefs instructed all their people not to kill any white people. It was feared (rightly) that more whites would come for revenge and the Yavapai's bow and arrow technology was no match for the US Army.

Unfortunately, Yavapai people have been confused for hostile Apaches ever since the Spaniards arrived in the 16th century, up to present day.  In fact, the two tribes are entirely distinct and have unrelated languages. The story behind Bloody Basin is one such example of this misidentification.

The Yavapai name for Bloody Basin is Atasquaselhua or "Sycamore with yellow leaves in the fall." The Yavapai women would cook mescal nearby at a place called "matkama". (*4)

"Three (of the four) tribes of Yavapai got together at Bloody Basin: Kewevkepaya, Wipukpa, and Yavepe." They gathered to cook mescal and deer. It was a springtime celebration. They called the festival "boom" which means "in the spring". They came to pray, sing, dance and heal, but all that would soon be shattered. (*4)

Instead, the Yavapai relate that "the soldiers met them there and killed them. Then the white people called the place Bloody Basin. Called it after our blood," the oral history complains. (*4)

When the shooting began, the Yavapai naturally backed farther into the cave. The soldiers responded by ricocheting bullets off the ceiling of the cave to kill more.

Only two Yavapai survived the massacre. Two babies were found alive by the army, still in their baskets. The Army hung the baskets in a tree and other Yavapai found them, took them and raised them.

The loss was devastating and completely unwarranted.

Perhaps the time has come to erect a memorial at "Bloody Basin" for the people who truly were massacred there: the Yavapai. This author starkly submits that had it been White people who were massacred in the face of an Indian onslaught, there would have been a memorial placed there decades ago!

Bloody Basin Road is a 39 mile dirt road that starts at exit 259 off Interstate 17 and runs to the breath taking sheep bridge over the Verde River. This author found many articles and videos of people who made the trip and were delighted with it. 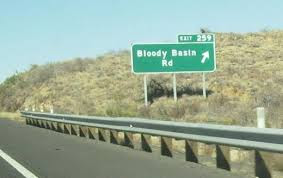 Plan on taking most of a day for this drive to give you plenty of time to stop and explore along the way. Bloody Basin Road goes through Agua Fria National Monument Click Here for Info and one of the Indian ruins here is Pueblo La Plata. Most of the ruins have no published directions to them so you need to scout around some of the intersecting forest service roads to find them. Same goes for the old mines. A four wheel drive is necessary to travel most of these adjoining roads.