Sheriff's Exploits Were Hollywood; His Appearance Was Not

Jim Roberts wore a plain black, "eastern-sized" hat, with no band. He donned a plain white shirt and blue jeans; the side pocket worn white from the outline of his old frontier model, single action Colt. The gun looked as if it hadn't been shot in years and bore no notches. He had no holster and wore no boots. (*1)

But perhaps his greatest antithesis to the iconic image of the "Hollywood gunfighter" was Roberts' ironic relationship with horses. He developed a reputation for breeding some very fine ones, yet he would never ride one himself. So when one summoned the sheriff, instead of bolting in on a sweating steed, Roberts would mosey-up on his mule! (*1)

"He always returned your greeting. Question him, though, and he would shut up like a clam," another said. (*1)

To the local law-abiders, he was fondly known as "Uncle Jim."

Appearances aside, Roberts was a highly respected and lethal gunfighter who kept some of the rawest of Arizona's frontier mining towns in lawful order.

Read more »
Posted by Drew Desmond at 2:44 PM No comments: 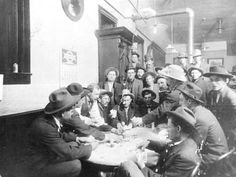 Fred Marshall was a disturbed, angry man. Few in the area knew much about him or anything of his past. (*1)

Yet one warm June evening, Marshall would receive his "15 minutes of fame" in a most notorious way.

He and a local machinist named S.F. Wrenn "were shaking dice in (George G.) Casey's Poolroom and became involved in an argument over a $2 bet," which Marshall "refused to pay." (*2)

"During the argument, Wrenn knocked Marshall down." Incensed, "Marshall went across the street to his home and procured a revolver. He returned to the pool hall (where he) was met outside the door by Wrenn.

"The two men grappled. Wrenn wrested the gun from Marshall and during the struggle, one (shot fired). Several witnesses testified to having heard Marshall scream that he was shot." As Marshall retreated, "Wrenn took the gun into the pool hall, tossed it across the bar to Casey and said laughingly: 'Here's a gun I just took away from that fellow.'" (*2)

But Fred Marshall was not done.

The Incredible Story of the Million-Year-Old Frog

Life is tenacious. But one frog,  found deep in a Prescott area mine, showed a tenacity to stay alive that many biologists would have considered impossible.

Although described in the title as a "million-year-old frog," the depth at which it was discovered suggests that this remarkable amphibian was tens or even a hundred times older than that!

Read more »
Posted by Drew Desmond at 7:11 PM No comments: 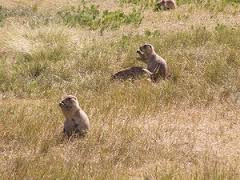 For a rodent, they are undeniably cute. But to farmers and ranchers they're a horrible pest. Where there are prairie dogs, agricultural output decreases 25-85%. (*1)

Yavapai County once had 1.5 million acres "infested" with prairie dogs. (*2) When Prescott's airport was first being laid-out, workers "went up and down both runways with shovels leveling the mounds and filling up the holes made by the hundreds of prairie dogs that infested the field."(*3)

So, what happened to them?

Read more »
Posted by Drew Desmond at 6:53 PM No comments: