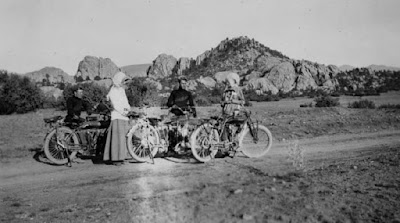 Back in 1911 motorcycles were closer to what people might call motorbikes today. Early machines had pedals like a bicycle. Single cylinder engines produced a meager 4 horsepower, while 2 cycle engines produced 7.

Still, like the automobile, motorcycling proved popular and on March 10th, 1911 a number of enthusiasts formed the Yavapai Motorcycle Club.

Read more »
Posted by Drew Desmond at 7:28 AM No comments:

The Masons were the business owners, lawyers, doctors and politicians.

Indeed, organizing a Masonic Lodge in Prescott, (the Territory's first,) was considered so important that one was quickly established before the appearance of a denominational church!

Read more »
Posted by Drew Desmond at 7:47 AM No comments: 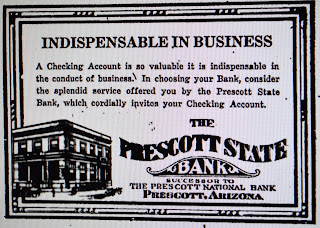 John Frye was a well-liked, 20 year-old who came to Prescott and got a job as a correspondence clerk at the Prescott State Bank.

In mid-February, 1918, he informed people that he had received a telegram notifying him "that his aunt who had raised him was seriously hurt in an automobile accident, requesting him to come to Seattle immediately."

In fact, this was a ruse. Frye was attempting to evade the police before an act of embezzlement in Seattle caught up with him. Additionally, he was planning another caper in New York City where he would walk out of local banks there with the equivalent of $500,000 today.

Read more »
Posted by Drew Desmond at 8:08 AM No comments:

1933-41: Army of Young Men Save & Improve the Prescott National Forest 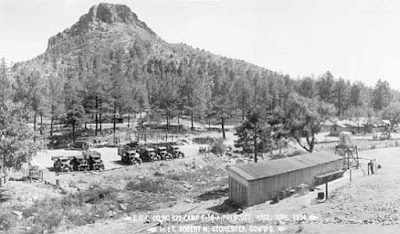 One of Franklin Roosevelt's most popular Depression programs was the Civilian Conservation Corps.

The CCC enrolled unskilled and unemployed men between the ages of 18 and 25. The men primarily came from families on government assistance.

Each worker received $30 per month (that's $600 today) plus room and board at a work camp. However, the men were only allowed to keep $5 of their pay. They were required to send the rest back home to help support their needy families.

The Prescott National Forest had many of these work camps and the legacy of their work is still with us today.

Read more »
Posted by Drew Desmond at 7:18 AM No comments: