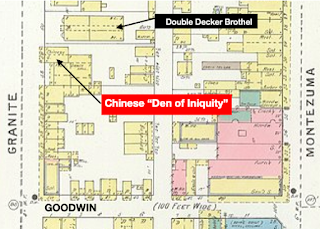 No one knows what the business was actually named. A Sanborn-Perris mapmaker identified it only as “Chinese” in 1895.

This writer might have considered it “The Chinese Entertainment House,” but authors of the archeological report, "Celestials and Soiled Doves..." used biblical verbiage to describe it as a “den of iniquity.” Specifically, it was found to be a “gambling parlor/saloon/opium den/drugstore, [that] filled many needs.” 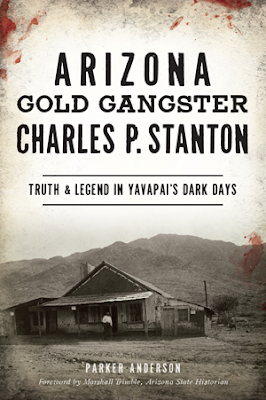 When Parker Anderson put the folklore of Charles P Stanton in the crucible of fact-checking, nearly all of it burned away. Indeed, nearly everything one thought he knew about this famous legend is either untrue or highly dubious. 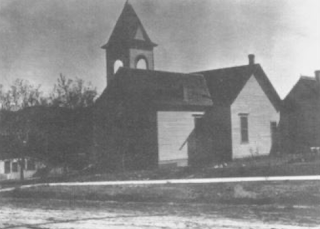 It was all over some disparaging remarks made about a young Mayer woman “whose name none of the witnesses were able to pronounce or spell,” the paper reported. She confronted Louis Price, age 20, about the “sliding remarks” purportedly made by him at the Mayer mercantile. Price became embarrassed, and later, angry. When Price asked her where she heard the rumor, she evidently replied that the it was Ned Cagle, age 18, and son of Prescott Methodist Pastor CM Cagle.

Now it was Price’s turn to confront Cagle.

Read more »
Posted by Drew Desmond at 7:16 AM No comments: