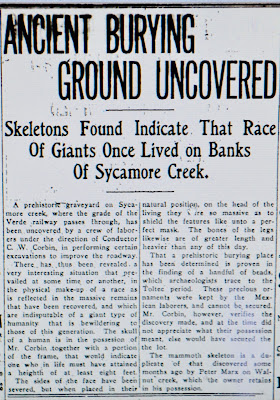 In February 1913, a road crew started digging "where the grade of the Verde railway passes" over Sycamore Creek in order to facilitate improvements. Soon they uncovered evidence that they had found a prehistoric gravesite. What shocked them further was the enormous size of the bones located within it.

It was later calculated that this humanoid skeleton must have stood at least 8 feet tall.

The First Prescottonians Killed in the Indian War 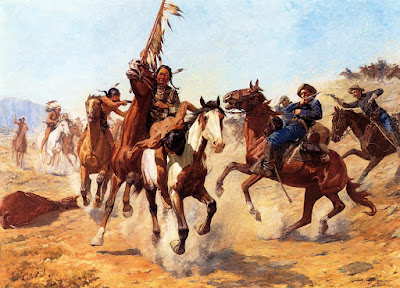 As Prescott began to develope into a small, isolated bastion of anglo civilization, conflicts with Native Americans were immediate and regular.

The Zany Prostitution Sting at the Depot House 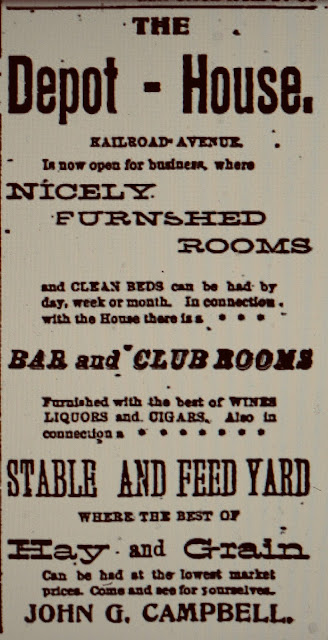 By 1918, Prescott was keen to clean-up the city's reputation in regards to prostitution. Fines were increased from a simple slap on the wrist to truly punitive amounts.

The red-light district on Granite street was closed down and prostitution stings were begun at other locations including the Depot House. However, on the night of August 4th, the sensitivities of the Chief of Police would be put to the test and, in the end, Cupid would have his way.

Read more »
Posted by Drew Desmond at 8:35 AM No comments:

One cannot fully understand the Indian Conflicts in Yavapai county without a general understanding of the military posts of the time.

Here then is a primer of the early military posts including locations, dates, the the reason behind their names. This is first presented in alphabetical order followed by a chronological list.