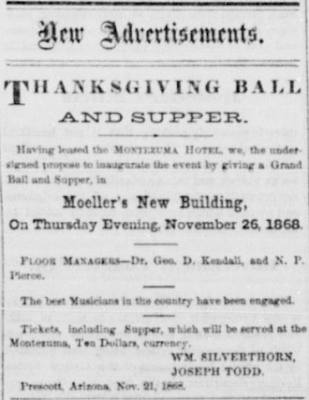 The first Thanksgiving Day, November 9th, 1866, was a solemn one in Prescott. Some were thankful that the Union had been preserved, while others that the killing and destruction had finally ceased.

It was “the first time a day of Thanksgiving (had) been set apart in this territory,” the newspaper reported, and was “duly respected” with a community remembrance. However, the annual festivity would soon slip into neglect in Prescott and elsewhere in Arizona.

Many are familiar with the first building in Prescott, and oldest surviving log cabin in Arizona, “Fort Misery.”

Then there was a second Fort Misery near Oro—or maybe there wasn’t. The mystery and controversy about the military presence near the banks of Humbug Creek during the Indian conflicts has flared-up in recent years.
Read more »
Posted by Drew Desmond at 9:00 AM No comments:

As Robert Groom plotted out Prescott and created the Plaza in the middle of downtown, it wasn't necessarily meant for the county courthouse. The first courthouse was located on the street facing the plaza.

Instead, it was left as an open public space and its uses were many and varied.

Read more »
Posted by Drew Desmond at 8:47 AM No comments:

The History of Palace Station 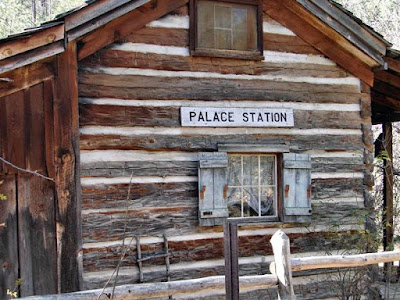 Palace Station, located 17 miles south of Prescott, is one of the most famous stage stops in Yavapai County. Having been built in 1875, its history is long and its future is bright.

“Palace Station is one of the few remaining stagecoach stations dating from the settlement of the Arizona Territory. The station played an important role in the social and economic development of the new territory and is now…on the National Register of Historic Places.”