The railroad's section foreman was five or six miles out toward Jerome doing his usual job, when it was time to take his dinner break. He found a nearby rock to sit on and began eating the food from his pail.

There wasn't anything particularly new to look at, so he happened to look down at the rock he was sitting upon.

Soon he noticed something shiny and matted within the rock that caused an instant double-take. It was shiny; it was heavy; it was gold!

The foreman stood up and examined further. Not only was there some gold in the rock, there was a great deal of it!

Not only was there one gold bearing rock, but an entire vein was visible!

He couldn't wait to rush back to Jerome Junction and tell of his unbelievable luck. So he broke off several pounds of the ore as a sample and took his handcar to get back to the hotel in town.

NOTICE:
This article is effectively retired.
Four years after this article was published, historian Parker Anderson researched the subject for his book "Arizona Gold Gangster Charles P Stanton." Nearly all of the folklore was proven to be untrue or highly unlikely...
When Charles P Stanton first set his eyes on the town of Antelope Station, he coveted to make it his own personal empire. Eventually he would name the town in honor of himself and rule it with a murderous tyranny that would even make Al Capone blush.

"While Stanton, Arizona never had the glamor of Tombstone, in the days of Charles Stanton, no town in the West could equal the murderous, evil environment predominating life in this (otherwise) thriving gold-mining community." (*1)

In fact, Stanton gained such a heinous reputation that travelers in the area steered clear of the town. (*1) 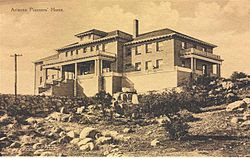 Whatever happened to the pioneer miners when they got too old to work?

As Prescott began to mature at the beginning of the 20th century, this was hardly a theoretical question. The old pioneer miners were becoming aged, infirm and could no longer toil after years of back-breaking work.

They worked in extraordinarily tough and dangerous conditions, bringing wealth and the very founding of the community and the state. Now, in their sunset years, they needed Arizona to help them. 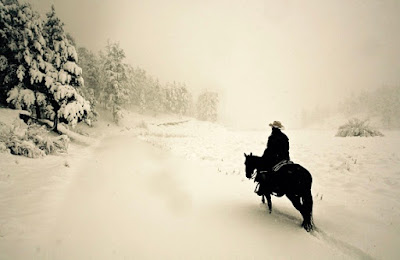 The winter of 1915 in Yavapai County was one of the wettest in the area's history.  Wave after wave of heavy moisture came through the Prescott area stretching all the way down into the Sonoran desert. (Ultimately, this unusually wet winter would change the ecosystem of the Prescott National Forest forever introducing the white-tail deer to the area.)

In the valleys, there were copious amounts of rain with Williamson Valley flooding several times.  Initially, ranchers were excited that "the ground was soaked to the grassroots" and they anticipated "one of the very best ranching seasons ever." (*1) However, this wet abundance would prove to be a two-edged sword.