"Story of a Hanged Man" by Parker Anderson


It was around the turn of the century when author and Prescott historian Parker Anderson was reading an account of (Fleming) "James" Parker, notorious outlaw and subject of many wild west dime novels. It was an interesting account, but much to Anderson's chagrin, it did not include proper sourcing.

Perhaps it was at this moment that Anderson succumbed to a syndrome not uncommon to historians: he was bitten by the "dig-up the truth" bug. Little did he know that he would be embarking on a sixteen-year odyssey that included hurdles, difficulties, and an occasional dead end.

Read more »
Posted by Drew Desmond at 9:04 AM No comments:

Meet the Kakaka: The Little Indian People Who Live in the Mountains

For those of us whose minds were formatted in the style of Western Civilization and culture, the Kakaka pose a paranormal puzzle. Are they spirit beings? Are they aliens? Are they elementals? Do they even exist at all? However, for the Yavapai and other Arizona tribes, the Kakaka aren't only real--they're a vital part of their culture.

For it is the Kakaka who give instruction and teaching to their medicine men.

Story Behind the Names: Route 89: Prescott to Ash Fork

In this edition of "Stories Behind the Names" we look at:
Prescott, Chino Valley, Paulden, Drake, Hell Canyon, Ash Fork and other minor locations along the way. 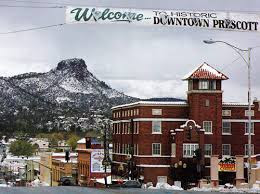 Most students of Prescott history are aware that the town "was named in honor of Massachusetts-based historian William Hickling Prescott, who was already deceased at the time and had never set foot in the west.  (*1)

It was unusual for towns to bear the names of people who were not involved with their founding, yet the start-up community of Fort Whipple officially renamed itself Prescott in May, 1864. (*1)

"Besides being the largest piece of solid masonry in the United States, [the Walnut Grove Dam] also drain[ed] the largest watershed in the world, being upwards of 400 miles of territory." (*1)

But in the dark, early hours of February 22, 1890 heavy rains would cause the dam to "literally explode."

"The disastrous breach of Arizona's first major dam poured 4 billion gallons of water into a canyon above Wickenburg and killed approximately 100-150 people, although no one will really ever know how many people drowned." (*2)