What It Was Like to be an Extra in "Junior Bonner" 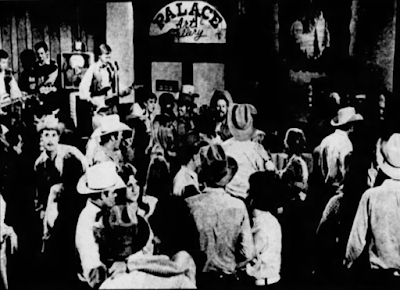 Sam Peckinpah was in Prescott directing the 199th movie made in Yavapai County, “Junior Bonner, when he noticed a nude painting titled “Olympia” by Earl MacPherson. Peckinpah thought it would be perfect hanging behind the Palace bar for some scenes he would shoot there. When asked if the movie could use his painting, MacPherson bargained that they could if he was hired as an extra. Peckinpah was happy to agree. Thus began an interesting, four-day, behind-the-scenes experience for the painter.

His wife was delighted and “all evening [his] phone was busy with: ‘Earl is in the big movie with Steve McQueen,’” he once explained to the Arizona Republican. He went to sleep “with visions of becoming the next John Wayne.”

The next day MacPherson arrived for his role at a vacant building next door to the Palace bar, “along with about a hundred other extras.” He was handed a pink time card and told the organizer that he was “a dude in a big bar scene,” and asked her if he should go in.

“You don’t go nowhere till I tell you,” she replied. “Now sit down over there with those Indians.” The Apache family he was now sitting with was sure that they had seen the artist in “Then Came Bronson,” and asked him for his autograph. Although MacPherson had never been in any movie previously, his “wounded vanity” was being restored, so he signed his name and went to the Palace back porch.

After visiting with some friends who also got parts as extras, MacPherson was told to sit in a booth where his picture “Olympia” was hanging. He was thrilled and whispered to the others: “Maybe I can even sorta point a finger upwards at my painting. Just think of the publicity!”

“Stop whispering,” assistant director Mack Harding admonished. “From now on, when you’re on camera act enthusiastic, drink beer, wave at your friends, smoke or do anything you like, but don’t make a sound. Otherwise you’ll louse up Steve McQueen’s sound track.”

A “big $50,000 Mitchell sound camera was wheeled into position,” and a rehearsal was called. “The huge klieg lights came on from the ceiling and everything was transformed into the world of make believe,” MacPherson recalled.

During the rehearsal, The artist was thrilled to be directly in line with the camera, but when the scene was shot for real, he realized that a crowd of dancers and wandering drunks were blocking him from “being preserved for posterity on film with Steve McQueen.”

Peckinpah took several takes but only once did MacPherson feel that the camera had him in a clear shot. At that moment, MacPherson grabbed a prop beer can and took a big gulp. Unfortunately, it contained a few ounces of stale beer as well as a cigarette butt which became lodged in his throat.

Then it was time for lunch.

The meal was served in a pecking order. Stars were served first; production staff second; extras who were on camera third. MacPherson was served in the fourth and last group. “The food was great and the servings were huge,” he recalled. “We dined together picnic style in the Plaza under the admiring glances of visitors and Prescott people.”

After lunch, work continued and the trio that was in MacPherson’s booth was joined by “a little old lady in a buckskin cowboy outfit,” whose smoke from a constant chain of lit cigarettes obscured the view of the camera. However, MacPherson was excited when he was given new instructions: “When the action and music starts up again, get up and make your way through the crowd to the back bar.” Pointing to the little, old chain smoker, the assistant director said “And you follow him.”

When the call was made for “action,” MacPherson did his duty, making his way through the dance floor to the back bar. But when he turned around, the chain smoking old lady was no where in sight. Unfortunately, she lost him in the crowd, panicked, froze, and stared directly into the camera like a doe caught in the headlights. The shot was ruined and everyone had enough for one day.

By then, MacPherson’s yellow shirt stunk of sweat and cigarette smoke, but he was required to wear it everyday for the sake of continuity. The second day MacPherson was stationed in front of the bar, directly in front of the camera. But when the director called “action,” several other extras crowded in. “There are two kinds of extras,” MacPherson observed, “the hams and the lambs. The hams connive, scheme and push to get in [the shot] and the lambs…couldn’t care less and are only there for the $15 a day.”

The third day MacPherson wasn’t called upon at all and instead, “sketched a lot of extras and two of the stars,” as well as the canine star “Spike.”

MacPherson’s wife laundered his outfit before the fourth day. The celebratory scene after Junior Bonner’s victory was to be filmed and real, free whiskey and beer was served to all to “add realism.” MacPherson was given a prominent spot until Sam Peckinpah realized that the freshly washed, yellow shirt was reflecting too much light. The assistant director walked up and said “Mr. Peckinpah wants you way in the back.”

On the final day, MacPherson was weary of the work and asked if he could simply be a member of the crowd and sit in the usual booth. But the booth was going to be where the “big cattlemen…come in with their girlfriends.” So, MacPherson was instructed to get up with his booth-mates, give up the booth to the cattlemen and walk out the door. “That gets you out for good and you can get back to painting,” he was assured. At first, he was told to take as much time as they needed to say their good-byes, but after rehearsals, they were told to cut it down to three seconds.

This time things went perfectly. “‘It’s a take,’ Peckinpah said,” and Earl MacPherson received a portion of his fifteen minutes of fame.

Story of Franklin Delano Roosevelt's visit to Prescott, AZ in September 1932 before traveling to the Greenway Ranch.

If you have an experience with the making of Junior Bonner, PEOPLE WANT TO HEAR ABOUT IT!! Sharlot Hall Museum wants you to share your story so we can have a complete account of the summer of ’71! Please email Jenny Pederson at jenny.pederson@sharlothallmuseum.org.

#PrescottAZHistory publishes a new article on Sundays. Follow the blog in one of the following social media to be sure you get the latest article!