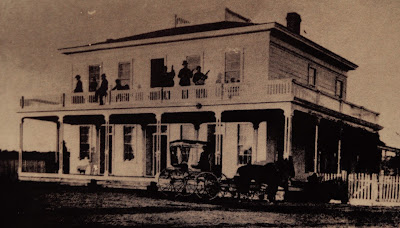 It was in 1876 when Jefferson Harrison Lee built the large two-story hotel and stage stop. It was located at a prime intersection on the Prescott to Hardyville tollroad. Named the American Ranch, it was the most elaborate stage stop on the entire 150 mile road. (*1)


When JH Lee brought his wife to Prescott in July, 1864 "there were seven houses in the village. Indians were plentiful and were not always friendly." (*2)

"They were happy to get to Prescott. (Lee's wife) Agnes loved it at first sight because it was so different from the dreary mining camps she had left." (*1)

One of Mr. Lee's first jobs was cutting the large logs for the Governor's Mansion. (*2)

He also worked for Curtis & Noyes sawmill south of town. (*3)

"Soon Lee had a contract to harvest native grass hay in Lonesome Valley to feed the calvary horses at Fort Whipple. Next he homesteaded 160 acres of good farmland about a mile down Granite Creek from Fort Whipple. Later this property was known as the City Ranch and is still owned by the city of Prescott." (*1)

Still, Lee had his eye on the property near Granite Mountain that would become the famous stage stop. At one point he tried to trade his City Ranch for the American Ranch property, but the sale was "pre-empted." (*3)

His initial disappointment would prove to be a boom. Sharlot Hall told the story of the acquisition thusly: Bert Lee, JH's son, stated "that he could remember very well the circumstances surrounding the acquisition of the American Ranch by his father. He and his father happened to meet the owner of the American Ranch at a point near Prescott." (*4)

(The owner of the American Ranch property, Dan Conner, had come to the area with the Walker Party and was anxious to leave to hunt for gold in California.)

Conner said to the elder Lee: "'Let me trade you for the ranch'. Upon inquiry (Conner) stated that his ranch was 'over at the foot of the mountain.' Information was also given that there were a few Indians on it, but the owner would throw them in without additional charge. It was arranged to go over and look at the ranch a couple of days later." (*4)

"When they went to inspect the ranch and negotiate the transfer," Connor, JH Lee, and his son Bert Lee "were on horseback and rode near the lake but did not enter the area covered by trees and brush because of the danger from Indians. Mr. Lee asked the owner what he would take for it. 'Well,' said (Connor), 'that is a pretty good looking six-shooter you have there. Suppose you give me the six-shooter and some ammunition and we will make the trade.'" (*4) 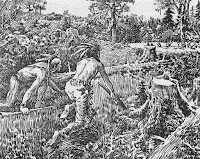 ALSO ENJOY: The Indian Raids on the Bully Bueno Mine
See how Native Americans successfully used the tactic of "guerrilla attrition" to keep a prosperous gold mine from operating during the Indian Wars in Yavapai county, Arizona.

"The agreement was made, but Lee did not deliver the six-shooter until the settlement at Prescott was reached on the return trip, for in those days it was not prudent to go unarmed. When the party had reached a point on the trail near St. Joseph's Academy, the elder Lee unbuckled his gun and handed it to (Connor). Bert stated that he never saw the man again for 35 years." (*4)

The "Indian problem" was such that JH Lee refused to take his family there instead leaving them at the City Ranch closer (and safer) to town. JH lived on and started developing the American Ranch by himself. (*1)

"When (JH Lee) was on the American Ranch for about a year, a man came in one day riding a mule and stayed overnight." The following day the man searched desperately all along the northern end of the lake. "Upon being questioned he showed a Spanish map or chart which indicated the position of a silver mine and an old Spanish bastion, or fort.  At that time the fort had not been found, but since that time Lee discovered the old fort in ruins. However, the man with the chart never did return." (*4)

"(Lee) built a three-room adobe house (creating a) hole from which he obtained the clay to make the 'dobes." (*4)

"He covered this hole with brush and then dug a tunnel from the hole to underneath the hearth in the house. On top of the tunnel entrance into house he placed a large flat rock that could be moved. He used this to escape from the Indians at least twice." (*1)

"One night the Indians attacked the house and set fire to it. (JH) escaped through the tunnel." Another time Lee was tipped-off by his dogs that Indians were creeping up on the house through the potato patch. "(He) took up a position in the adobe hole with a double barreled, eight guage muzzle loading shotgun. He fired both barrels where he thought they would do the most good and the next morning found where two of the Indians had fallen apparently mortally wounded, judging by the blood on the ground." (*4)

Eventually the threat from Indians decreased sufficiently for Lee to bring his family to the American Ranch.

"The Ranch marked the intersection of the (Prescott to Fort Mohave) Toll Road and the road to La Paz. The road from La Paz came around the north end of Granite to meet the Toll Road at the Ranch. These roads were two of the most traveled in the Arizona Territory." (*5)

"After Mrs. Lee moved to the ranch their business began to prosper." Soon the need arose to build a bigger building to accommodate more people. (*1)

An informative listing of 9 cryptozoological animals that have been seen in Arizona. Includes a Bigfoot update near Prescott.

To celebrate the completion of his new building, Lee held a ball at a cost of $5 a ticket (a day's pay for many laborers.)

The newspaper reported: "A large crowd (went) west from town...to attend the ball at the American Ranch. Those who went are enthusiastic in praise of the entertainment. It is one of the finest stations in the Territory and we understand the building is finished up in superb style." (*7)

"It is just the right distance from town for a pleasant drive over a splendid road, making it almost impossible for the young people to stay away." (*1)

"When Agnes moved to the ranch she immediately expanded the dairy and poultry operations, selling to Ft. Whipple that which could not be utilized at the ranch. A large acreage of beans, potatoes and other vegetables was planted. Apple and pear trees set out earlier came into bearing, and the meals she began serving to people passing by soon gained a wide reputation among regular travelers from California to New Mexico and points in between." (*1)

"Her menu was a bountiful one. They raised and cured their own pork, raised their own mutton, beef, chicken and eggs. Agnès baked bread almost daily, along with her apple pies. She churned fresh butter for her table, made cheese, jellies and jams." (*1)

"Long lines of freight outfits lumbered by, usually 2 or 3 every day, and always some of them stopped at the ranch. As a rule the teamsters carried camp outfits and cooked outside, but Agnes's meals were too much of a temptation and it soon became the custom to eat in her dining room. (The freighters) also bought hay and corn for their teams, as well as fresh foods to carry with them." (*1)

"The American Ranch was an important stage stop until the Miller family built a toll road on what is now Iron Springs Road;" then much of the traffic began to bypass the ranch. (*5)

"As the Lee family passed on, the ranch house gradually deteriorated" due to weather and vandals and after standing nearly 100 years it was finally, (and unfortunately) bulldozed to the ground. (*1) 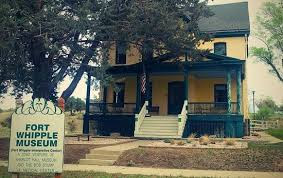 Visit the Fort Whipple Museum located on the VA Medical Center grounds off 89, just north of the 69 junction.

Click Here for Info on The Fort Whipple Museum
If you are an historic house enthusiast, you will enjoy touring the first and second floor rooms for their architectural interest alone. If you want to learn the history of Fort Whipple from its beginning in 1864 to the modern-day hospital, it is all there in riveting exhibits with crisp text, historic photographs and compelling artifacts. Friendly, knowledgeable docents will give you a tour of the exhibits and answer any questions you might have.
Did You Know... that #PrescottAZHistory publishes a new article four times a month on Sundays? Follow the blog in one of the following social media to be sure you get the latest article!

Yavapai County has sent hundreds of thousands of items to the Smithsonian Institute; most of these being insects and indigenous artifacts, b... 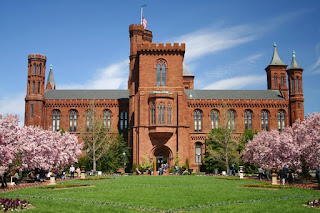