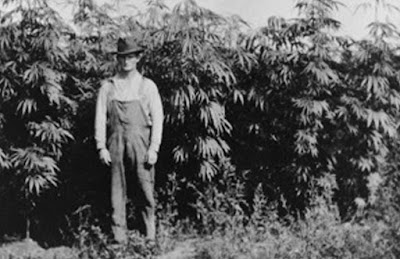 The majority of the material for "Prescott, AZ History" is from reading weeks and weeks and months and months of old Prescott newspapers.

So imagine this author's surprise when he came across this headline:

Could it be true? A large, civic, pot smoking party in Prescott?

This is going to take some further research!...

Back in the early 20th century, not only was cannabis legal, but it was widely used in medicines and had none of the negative stereotypes that it carries today.

But did people actually call it "weed" a century ago?

Read more »
Posted by Drew Desmond at 8:11 AM No comments:

Prescott's "Man of (Her First) Century"

The year was 1964 and Prescott was celebrating her first centennial. As part of the celebration, it was decided to chose a "Man of the Century." That choice was Morris Goldwater.

When looking at the man's resume of civic service, it is hard to imagine that anyone of any future century could come close to what Morris Goldwater accomplished in helping make Prescott an urban municipality.

In its early years, Prescott struggled to grow from a back-water mining town to a civilized city and whenever Morris Goldwater saw a need for Prescott, he would set out to accomplish it himself.