Halloween A Century Ago 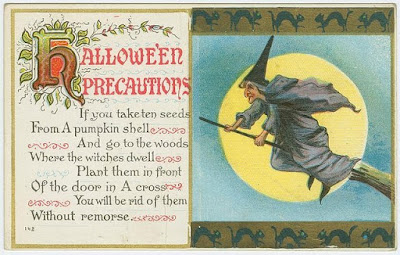 In the early 20th century, before there were Halloween treats, there were Halloween tricks. Children and teenagers all across the country would run off with anything that wasn’t nailed down. Doormats, yard and other tools are prime examples. But at times, our intelligent Prescott juveniles would use their astuteness for more creative acts of mayhem. In 1911 the Weekly Journal-Miner warned: “All good housekeepers will take the precaution tonight to remove the front gate and hide it under the bed. By doing so, they will be able to boast of owning a gate tomorrow morning. Tonight is Halloween.”

Read more »
Posted by Drew Desmond at 9:11 AM No comments:

The Indian Offensive of 1868 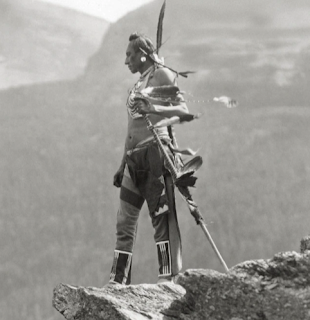 Although Indian attacks were a constant fear in the 1860s, they were not a constant occurrence. However, in the last third of 1868, the Native Americans definitely took the offensive.

The Hassayampa Inn Was a Community Project 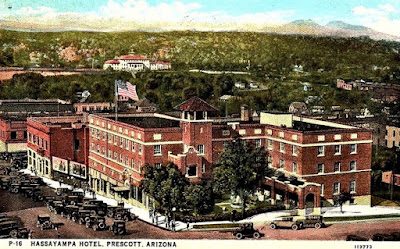 Particularly during big events, Prescott perennially has suffered a shortage of hotel space. Even today people attending the World’s Oldest Rodeo often have to stay in Cottonwood.

After the Congress Hotel burned down, the situation became especially acute. No one who was interested in building a hotel in Prescott could be found. As a result, the community decided to solve the problem, and finance it by the sale of stock. So in December, 1924, the Hassayampa Hotel Company was incorporated. “The Chamber of Commerce and business leaders had decided that a grand hotel would attract tourists and opportunities for enterprise into Prescott.”

The community was optimistic that a replacement for the Congress Hotel would be constructed quickly, but it would be nearly 3 years before the doors of the “modern, beautiful, and fireproof hotel” would be open.
Read more »
Posted by Drew Desmond at 8:56 AM No comments: