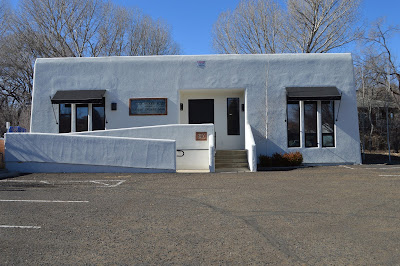 In 1994, 16 people from the Yavapai Chapter of the Arizona Archeological Society spent over 400 hours investigating the lot at 140 North Granite St.

“The team of dust-caked investigators found building foundations and artifacts seven feet below street level,” the Courier reported. Although nothing particularly mysterious or unexpected was located, the excavation did offer insights into everyday life and what happened with some of the tons of waste material from the Great Fire of 1900.
Read more »
Posted by Drew Desmond at 8:42 AM 1 comment:

The Forgotten Mother-Load at Richenbar, AZ

Many are familiar with the mining riches that came out of Tip Top and Crown King, but there was another mother-load of gold in that area known as Richenbar.

It was 1867 when three miners decided to explore what appeared to be an ancient worked-out mine. They descended a 45 degree angled shaft into what appeared to be a cave. There were no timber reinforcements to be seen and the only thing connecting the ceiling to the floor was a single 4 foot pillar in the middle of the expanse. Upon closer inspection, they noticed a pure vein of gold within the pillar measuring 2 inches thick. Two of the miners wanted  to extract it, while the third thought it too dangerous. The two carefully worked the pillar and were successful in extracting a “coffee sack” full of ore which eventually was found to contain a whopping 937 ounces of gold.

This mine would come to be known as the Aztec Mine when ancient Native American tools were discovered inside. Eventually the entire surrounding area would have claims and the town of Richenbar was born. Soon the gold deposit there became famous, and the famous would invest in an area so rich that one miner thought it would bring "death to gold."
Read more »
Posted by Drew Desmond at 9:16 AM No comments: