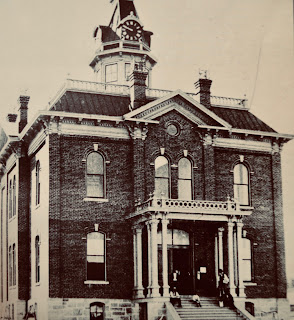 It had only been three years since Yavapai County’s seat was formed and there was already need for a jail. Prisoners were being kept under an expensive 24/7 armed guard and two criminals already cost the county $2000 each (about $180,000 apiece today,) to keep them before and during trial. So the county floated bonds, worth nearly a million dollars today, to build a new (now referred to as the “Old,”) Courthouse.

Read more »
Posted by Drew Desmond at 7:40 AM No comments:

The people of Prescott were excited when, in 1913, a sizable portion of the southern end of the Plaza district was approved to be the site of a new federal building and post office. It would be the first post office built by the US government in Prescott--perhaps even in Yavapai County.

Unfortunately, for nearly 18 years, this plot of land at 101 West Goodwin Street would largely remain a yawning cavity on the Plaza, until the building finally opened its doors in 1931.
Read more »
Posted by Drew Desmond at 8:00 AM No comments: 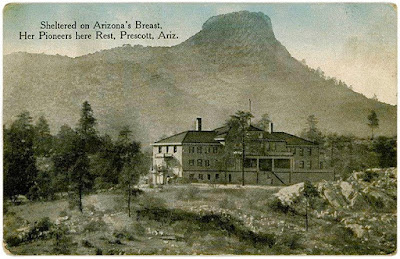 For attorney AG Baker, it was a routine chore. He left his office with a will in hand to be signed by a paralytic Pioneers’ Home resident, William Debus. Debus asked Baker to come down to the car for the formal signature that would leave nurse Clarance Dyer Debus’ worldly possessions upon his death.

“Two copies of the will were made for him. The name William E Debus was written in the proper space and with his left-hand, (the man) executed a cross. The document was witnessed by Baker and…the legal work (was paid for) with two $5 bills.”

It was at that moment that undersheriff Ed Bowers suddenly appeared and leveled a large six-shooter directly at the aged man’s chest.

“Throw up your hands!” He shouted…

Read more »
Posted by Drew Desmond at 8:45 AM No comments: 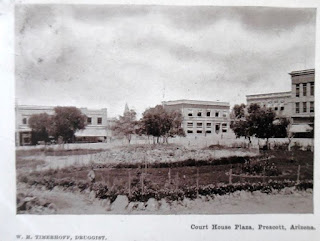 In 1867, the only permanent structure on Prescott's Plaza was a flagpole. But one morning in March, people arriving downtown came across an infuriating sight. "We are sorry to announce the arrival of the notorious and vagabond called ‘squatter’ in our devoted town,” the paper reported. A small party of men, “mostly strangers” to the area, “deliberately located or 'jumped' our town plaza, and are now proceeding to take and fence it.”

When one is in mining country, being called a “jumper” is one of the most derisive comments that could be leveled in public discourse.

Read more »
Posted by Drew Desmond at 8:10 AM No comments: