That Smokestack in Mayer Is an Antique 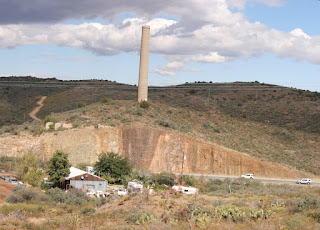 Whatever one wants to call it, the old smokestack becomes an official "antique" in 2017, celebrating its 100th anniversary then.

For commuters it marks that one is 17 miles away from Prescott Valley. To tourists it's an oddity. But the 129.5 foot-high tower which sits as a silent sentry over the town of Mayer, has an interesting history.

It was meant to carry smoke into the sky from the smelting of precious metals mined around Mayer. It was never used for that. In fact, it was never even finished!

Read more »
Posted by Drew Desmond at 3:02 PM No comments:

Back When Prescott Was "Opium Central" 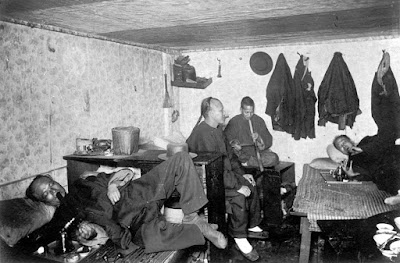 There is no doubt that like many other wild-west towns, opium made its first appearance in Prescott with the influx of the Chinese population.

"It is no coincidence that 1869, the year the Union-Pacific Railroad was completed, was the year that Chinese began to appear in (Prescott) in significant numbers." (*1)

So began a most uneasy relationship with a drug habit that would grow and endure for seven decades.

Publicly, Prescott hated opium. Practically, little was done to stop it. Ultimately, Prescott would become the manufacturing hub of opium for the entire state of Arizona.

Read more »
Posted by Drew Desmond at 2:50 PM No comments:

The Jack-the-Ripper of Yavapai County?


The Indian Wars abounded with examples of vigilanteism. Although illegal, at times it was a near necessity since official law enforcement was often days away. Yet one man's vigilanteism was so extreme in those days, that one might consider him to be a serial killer of Indians.

Even more distressing is the fact that when there exists an environment rife with racial cleansing, not only can a serial killer hide in plain sight, he might even be lauded for his ghastly deeds.

Such is the case of one John B. Townsend, 1835-1873. "Those writing of this man seem to agree that he had a pathological hatred for the (Indian) and he hunted them with grim determination." (*1)

A WARNING: The following story contains graphic racist remarks and incidents that can be harsh to read. It may not be suitable for sensitive readers.

Read more »
Posted by Drew Desmond at 3:27 PM No comments: