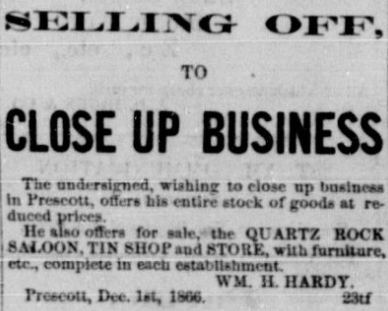 William Harrison Hardy had a good gig going. He owned businesses in a town named for him: Hardyville (present day Bullhead City.) He also owned an important and well used ferry service at that point and a tollroad that led to Prescott. Soon he started opening businesses there that were successful, but in late 1866, he abruptly started to sell off all his interests in the Mile High City.

A group of three detectives parked their automobile about a mile and a half away from the Puntenney lime mine near Cedar Glade (present day Drake) and began to walk toward the office. It seemed a long way to trudge, but they wanted their story to be believable.

“Our car broke down,” one of them told the office manager. “What kind of mine do you have here? May we look around while we wait for help?” The three began to fein interest in the operations as they set about to look for their real objective—an 11 year-old boy named Willie.

One of the detectives peered into a building and spied the youngster. The three men left, but that would hardly be the end of it. They were plotting to steal William Hurd Barrett for the third time in less than a year. 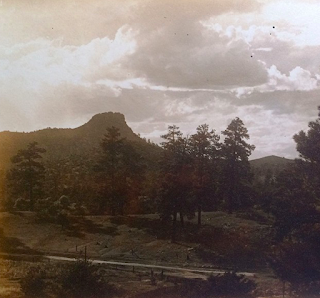 Miss Virginia Hite, a popular school teacher, arrived at the Plaza with her horse in a lather. She had come from the Sweeney and Anderson mining camp near Thumb Butte. The ride “of over seven long miles, on dangerous ground,” was made in a “record-breaking 30 minutes,” the newspaper reported. She had rode her horse “at almost full speed the entire distance, never drawing rein until she reached the Courthouse Plaza.”

There had been a shooting at the camp and the sheriff and a doctor were needed immediately.

Read more »
Posted by Drew Desmond at 6:57 AM No comments: