Member of the British Parliament, novelist, and Knight, Sir Gilbert Parker landed in Lakewood, New Jersey in December, 1911 in hopes of restoring his health from a bout of malaria. Upon hearing this news the Prescott Chamber of Commerce sent him an invitation to come to "the balmy shades of the pines." Although Sir Gilbert received many invitations, he decided to accept Prescott's.

When Sir Gilbert returned to London, he was armed with many photographs of the area. He would hold lectures about Prescott and Yavapai county to crowds of thousands. "If I had 20 sons," he would tell them, "I would send them to this new world."

Read more »
Posted by Drew Desmond at 8:06 AM No comments:

Bill Kirkland had a restless spirit, never wanting to stay too long in one place. At the age of 18 he left Missouri to make the long trek to California in 1850. He stayed there only five years before he relocated again, this time to Arizona.

There the pioneer would be accredited with many firsts. However, he is best known for a valley, creek, and town in central Arizona that would end up bearing his name.

Read more »
Posted by Drew Desmond at 7:36 AM No comments: 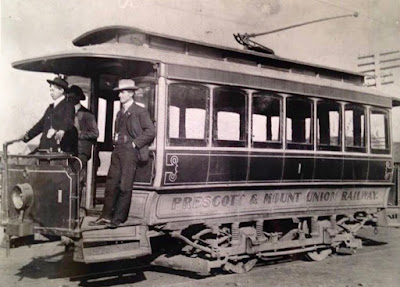 "Today, May 19, 1903," the newspaper proclaimed, "will mark the beginning of a new era in the industrial progress of the city of Prescott." That day saw "the beginning of work on the first electric street railway in northern Arizona, and Prescott now takes her place among the up to date cities of the west."

It was this level of excitement that announced the mundane arrival of the first railroad ties for the Prescott and Mt. Union Railway Company.

Fight! Badger vs. Bulldog vs. Hypnotist 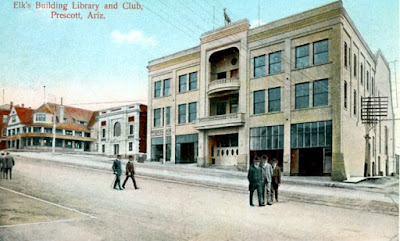 In the early 20th century laws were enacted to prohibit animal fighting, but social stigma against the practice was slow to catch-up. This was probably due in part to the popular, associated gambling on these events.

At one such occasion a visiting hypnotist who was performing at the Elks' Theater became involved. He would soon regret it.

In relating this disturbing, yet fairly common event in that day, the gory details have been withheld...

Read more »
Posted by Drew Desmond at 7:46 AM No comments: 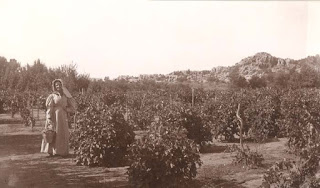 Those unfamiliar with the agricultural past of Yavapai county are sure to be astonished by the variety and success of the crops. Almost anything imaginable was planted and most did well--for a time.

1912 was a healthy year for both rain and crops with several varieties reaching mammoth proportions...