It was late September, 1932 and in a little more than a month, the United States would be choosing a new President. That man would be Gov. Franklin D. Roosevelt.

At this time he was traveling to Arizona to get a little rest and relaxation at the Greenway Ranch in Williams. Yet his popularity and his position would mix some work with his pleasure. The Arizona Democrats were meeting in Phoenix and FDR was compelled to attend.

From there, on his way to Williams, Roosevelt’s train would stop in Prescott to meet an exceptionally large, well-wishing crowd.
Read more »
Posted by Drew Desmond at 8:36 AM No comments: 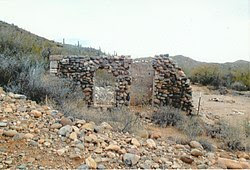 Daniel B Gillette needed a mill for his Tip-Top mines and the mill needed water. He found a spot 6 miles away on the Aqua Fria river. In a matter of months, not only was the mill in full operation, but a whole town complete with stores, saloons and hotels had sprung up out of the wilderness.

Just nine years later, the town which some thought would rival Prescott, would be dealt a mortal wound.
Read more »
Posted by Drew Desmond at 8:47 AM No comments: