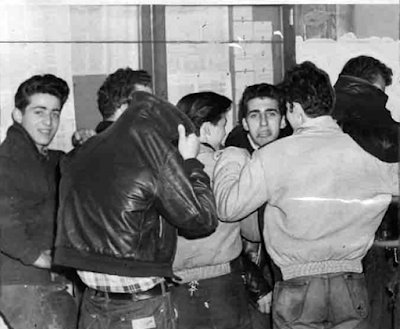 The headline in the paper spoke to the shock of the city:

It began as seven males were drinking at the Prescott Cafe. Three of the males, two 17 year-olds and one 18 year-old, were members of a rebel teen gang. (*1)

Perhaps they desired a change of scenery; perhaps they were asked to leave, but all seven decided to drive together to Phoenix. However, just south of Mayer, the car suffered a flat tire. (*2)

The three gang members decided to take the opportunity to rob the four other men. Soon, a 50 year-old former patient at the Whipple VA laid dead in a pool of his own blood. A second, blind man was in the County Hospital suffering from serious injuries including a possible fractured skull. (*1)

In a rare move for the day, Yavapai County Attorney, Jack Ogg, would seek to try the three teens, Joe Mungia and Joe Rudy Daniels, each 17 and Earl Padilla, 18, as adults. (*3)

Read more »
Posted by Drew Desmond at 3:07 PM No comments: