Cowboy Escapades #2: Autos on the Range 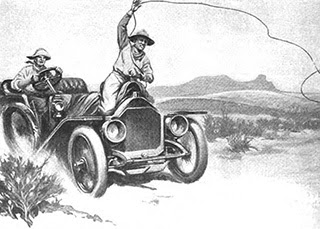 When automobiles were new inventions, it was inevitable that at least some cowboys would decide to try to replace their horses for cars in cow punching chores.

Indeed, at least twice it was suggested to start using autos in traditional events during the Frontier Days rodeo!

Read more »
Posted by Drew Desmond at 9:32 AM No comments:

Downtown Store Windows in the 1800s

A trip to downtown Prescott in the 19th century often included a gander into the store windows. Generally, merchants would display the very latest arrivals to their stock, but this wasn't always the case.

Fortunately, the newspaper was keen to mention what was being displayed at stores--particularly when those same stores were regular advertisers. These mentions offer insight into what a 19th century visitor to Prescott would see as he walked around the square. 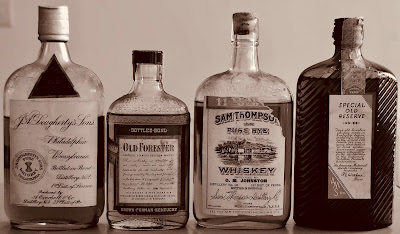 "Dutch" John Berent was sitting in the defendant's seat in Superior Court. Across from him lay "273 bottles of beer; (along with) 23 pints, two quarts and 3 five-gallon (glass jugs) of whiskey." Although he would soon be found guilty of bootlegging, he would successfully sue to have all that liquor returned to him!

Soon the sheriff's office would also become aware of Dutch John's notoriety and with the assistance of paid snitches and the employment of private detectives, John would find himself before the court judge.

Read more »
Posted by Drew Desmond at 8:34 AM No comments: