The Birth of Watson Lake 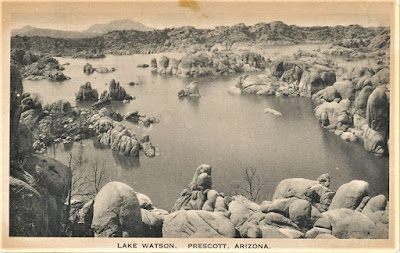 Nestled along the Granite Dells, Watson Lake makes for one of the most picturesque scenes in Prescott.  Watson is a man-made lake created in April of 1915 with the completion of the Granite Creek dam by a company from Indiana.
Needless to say, water is extremely important in the desert and the anticipation of a new lake close to the city brought the biggest celebration Prescott saw in many years.

There were notable speakers, free barbecue, Prescott's band and a special train to get to the celebration as the four-ton steel gates would be closed to store the waters of Granite Creek.  "Acting Mayor AJ Head...issued his proclamation declaring a general holiday from 1 o'clock until 5 on that auspicious day," the newspaper noted; even the courts were closed.


Watson Lake was named for the president of the Hassayampa Alfalfa Company of Indiana who was "one of the original incorporators of the project and has remained steadfast and persistent in upholding the ultimate outcome of the heavy investment as warranted by its future possibilities in reclaiming fertile lands that are said to be without equal in the southwest," the paper explained.  In other words, Watson Lake was created in hopes of turning thousands of acres of grassland in Lonesome Valley into farmland for grain production.
A relatively large crowd of 1200 people came to the celebration April 8th.  "There [were] parking facilities for a hundred automobiles within easy walking distance of the ceremonies."  A special train was scheduled to run the 4 miles and back at a cost of 45 cents--which would be $18 today; (more like cab fare than bus fare!)

The story of Prescott Valley, AZ's wave of UFOs in the late winter and spring of 2000.

The newspaper described the day: "It was a faultless Yavapai spring day and the picturesque rocks surrounding the dam were dotted with nearly all the most prominent citizens of the mile-high county, their figures relieved by stunningly costumed ladies and romping progeny, all bespeaking a lively, dignified interest in the proceedings."

A platform was built on the top of the "immense [dam] structure" for the band and the speakers.  It must have been quite a site as it towered "at a height of nearly 100 feet from the bed of the creek," the paper noted.  US Senator Ashurst was the keynote speaker with several other notable people orating as well. After the speeches, the celebration commenced as "the tenderest of barbecued Yavapai range steak...[was] furnished free to all visitors." Although the April 8th day of celebration was to include the closing of the gates of the dam, that actually did not happen until 6 days later.

It would take several weeks for the lake to become full.  Weekly progress was reported as the waters rose; detailing wagon trails that were now submerged and buildings that soon needed removal.  Dozens would drive daily to the spot to note the increasing size of the sheet of water. There was even talk of building a resort on the beautiful site!
Unfortunately, the scheme of irrigating the Lonesome Valley was brought with problems and never really worked. (See story of the Russian colony below.) RELATED: Colony of Russians Arrives to Farm
The story of a Russian immigrant colony who came to Chino Valley, AZ to farm in 1916.

Tourist Tips:
Watson Lake offers hiking, picnicking, summer camping (with showers), Boat ramp and rental (only non-motorized permitted), fishing, bocce courts, frisbee golf, and more (there is no swimming).  There is a very modest entrance fee; (in 2015 it's $2 per car).  The entrance to the park is located off the roundabout at Willow Lake Rd. and State Rt. 89.

Another way to enjoy Watson Lake is to hike (or bicycle) the Peavine Trail which travels the east side of the lake.  The trailhead can be reached by turning east on Prescott Lakes Parkway from St. Rt. 89.  After immediately crossing over the Granite Creek bridge, take your first left.  The animal shelter is located there also.  Then take a second left to park at the trailhead.

For those who would like to see and explore Watson Lake for free, there is a free parking area just south of the roundabout entrance on 89.  This parking lot can only be accessed by northbound traffic.  It makes for a good picture and a trail can be accessed below the parking lot at the lakeshore.

AN IMPORTANT NOTE about parking at ANY trailhead ANYWHERE:  Lock your car and put anything valuable out of sight!  Be sure to take plenty of water with you on the hike.

CLICK HERE for a Chronological Index of all the Prescott AZ History Articles
Posted by Drew Desmond at 10:22 AM

Prescott 1933: A Story in Pictures 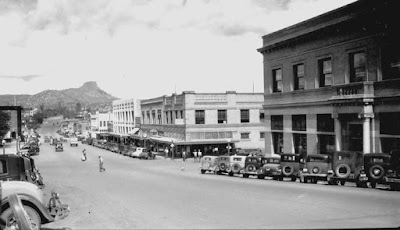