Monsoon floods of 1911 had cut a new wash through the farm that Peter Marx had been working since 1870. By chance, this new cut exposed some bones sticking out of its bank. Marx went to investigate and quickly unearthed a large leg bone about twice the size of a human's. 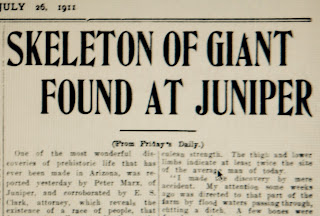 It is probable that the newspaper wouldn't have published the story had it not been corroborated by respected Prescott attorney ES Clark.

"One of the most wonderful discoveries of pre-historic life that has ever been made in Arizona, was reported yesterday," the newspaper crowed, "which reveals the existence of a race of people, that is not generally accredited to the primitive era, in the huge proportions of a skeleton that is now in the possesion of Mr. Marx."

"I made the discovery by mere accident," Marx detailed. "My attention some weeks ago was directed to that part of the farm by flood waters passing through, cutting a ditch. A few bones were found on the surface, but my impression at that time was centered to the belief that they were those of some animal that had been killed. I dug into the bank that was exposed by the rushing waters, and when a distance of about three feet in depth had been reached, the skull was found."

"The skull is of such an abnormal size that if the average man of this day placed it over his head, he still could find room to move it backwards and forwards or up and down with ease, without disturbing his natural position. From measurements taken from the skull, a number 10 hat would be required to fit it," the paper reported. (A size 10 hat would have an inside circumference of around 32 inches--that's an athletically-built person's waistline!)

"The teeth, several of which are still imbedded in the jawbone, substantiate the immense size of the head," Marx continued. "They are fully one third larger than those of the men today and present more the appearance of tusks than molars of the human family."

The skeleton was only partially complete, but there was "enough evidence to show that it was that of a giant."

"As to the bones, there is no disputing the fact that the owner was symmetrically formed, of immense size and herculean strength. The thigh and lower limbs indicate at least twice the size of the average man of today," the paper reported. 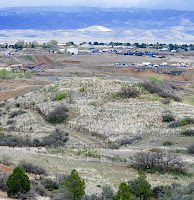 There was more than just the human shaped skull that pointed to the body's "humanness." Marx excavated further "when metallic arrowheads and spears; stone hooks to hold garments together; a plumb bob of stone, two inches in diameter and tapering to a point; stone axes and butcher knives; pottery of modern and primitive manufacture; and other articles were dug up."

It's interesting that metallic arrowheads and spears were found. Most Native American weapons and tools in this area were made of stone. "Pottery of modern and primitive manufacture" is equally cryptic and mysterious. It would have been helpful if a specific description of any designs or decorations on the pots were included.

Also intriguing was this additional observation: "Nearby was evidently an old fort. The walls were built of immense boulders, indicating that persons of great strength performed the work."

Although the newspaper was quick to suggest that a brand new race of humans may have been discovered, Marx himself was more guarded: "The bones of this monstrous human may have represented a race of men or a single individual. At any rate, the skeleton of the man in my possession is sufficiently complete so that the dimensions, which are astounding, may be accurately ascertained."

Although such discoveries of giant skeletons are rare, there have been several reported instances in the United States--particularly in the early 20th century when ancient mounds "were in the way" of roads and other construction. However, many of these other giants reportedly had a double row of teeth. If this "Juniper Man" had two rows of teeth, it seems that Marx would have noted it with his description of the molar size.

His suggestion that the teeth had a look of "tusks" makes one wonder if the skeleton of an undocumented primate like Bigfoot was found. Others might recall the biblical account of "giants in the earth" in Genesis chapter 6.

Marx sincerely concluded: "I have been the owner of that tract of land for over 41 years and have resided there continuously. That section of the farm has never been cultivated to my knowledge or anyone else in the country. No other human frame has been found, although I intend to keep digging. The relic will be kept in my possession, as I consider it a great curiosity. Mr. Clark (the attorney) has seen the skeleton, visiting the valley after I made the discovery."

Unfortunately, as in every other reported "unearthed giant," the present location of the bones is unknown.

RELATED: 9 Cryptid Monsters of Arizona (UPDATE: Bigfoot near Prescott?)
An informative listing of 9 cryptozoological animals that have been seen in Arizona. Includes a Bigfoot update near Prescott.

Peter Marx had no family in Arizona; he never married. When he died of stomach cancer September 5, 1922, his body was sent to Kewaskum, Wisconsin for burial.

Perhaps his "estate" was sent with him.

UPDATE:
After the skeleton was first reported, "many other articles (were) unearthed, convincing (Marx) that the race was progressive and well advanced as craftsmen; many crude implements being found, and in one instance writing slates, that give an intimation of education."

By October, 1911, many newspapers had printed the story. Marx was deluged with letters and even the Smithsonian Institute took notice. They sent an attache, one Mr. Shroup to investigate the findings.

"Mr. Shroup was provided with photographic instruments and took several pictures of the freak," the newspaper reported. "He also desired to take it to Washington, but this request was held up by Mr. Marx until...he ascertains whether Arizona desires it for its probable state museum. In that event, it will be donated."

"Mr. Shroup was very much interested in those portions of the human frame that were intact, particularly the skull which indicated that the giant was of such abnormal size as to be beyond comprehension..."

Marx also uncovered another, small burying ground near where he found the giant, "but all (the) skeletons dug up (were) normal size and attract but little attention. An old irrigation ditch has also been partly uncovered, and it (was Attache) Shoup's belief that the place was intelligently cultivated in some past age by an industrious people."

Many other artifacts were found near the giant's burial spot, "some of which (were) unique in construction, and for what purposes they were utilized is problematical," the paper reported.

ALSO ENJOY: 1913: Road Crew Finds Giant Skeleton on Sycamore Creek
Chapter 2 of Giants being found in Yavapai county, Arizona: True story of a skeleton of a giant unearthed by a road crew in 1913 along Sycamore Creek.

CLICK HERE for all the Prescott AZ History PARANORMAL articles!

CLICK HERE for an interesting webpage with more information about Giants