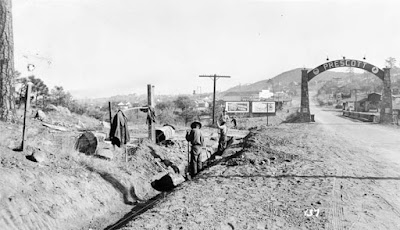 A patriotic meeting of the Prescott Corporation occurred at the Owl Drugstore March 3rd and epitomized public sentiment. The 150 attending dedicated themselves to “push Prescott forward,” the Prescott Evening Courier reported. “There was no lack of enthusiasm and displayed willingness to do all possible for the city of Prescott in the way of a paved road to Whipple; adequate water supply; paving and lights; and an up-to-the-minute hotel.”

They sang “America” and took the following pledge:

“I am a loyal citizen of Prescott.

I believe in its stability and in its future growth.

As a stockholder in the Prescott Corporation, I pledge my best efforts to aid in its upbuilding and continued prosperity.

One for all and all for one.”

However, before paving could be done, it was desired to eliminate the old-fashioned, unsightly telephone and electric poles from downtown first. While the power company was happy to bury their lines, the telephone company balked. They had a fifty year franchise starting in 1902 that allowed them “to erect poles and carry their wires in any way desired.” They estimated the cost of burying phone lines at $16,000 and phone customers would have an extra dollar added to their bill to cover the cost.

After these preparations, the paving of Prescott’s most important streets would continue until winter at a feverish pace. The Plaza and extended business sections were the first priority. Sheldon St., being the way to the new VA hospital was second. Mt. Vernon St., with its expensive homes was third.

Another important mark of a modern city was streetlights. Yavapai County installed them on the Plaza and they first turned on March 1st. The city’s streetlights, across from the Plaza, were tested three weeks later. However, flicking the switch revealed that there was more work to be done. “Some of the lights failed to go on,” the paper observed, “and during the early evening some jovial wag planted candles atop the dark globes.” The city’s streetlights did not match the Plaza’s then, but Prescott was proud to have ordered its from a Yavapai County company.

Sewer service was extended to the south on Montezuma, Cortez and Pleasant streets. “Much difficulty is being encountered,” the paper revealed, “due to the depth necessary to trench in order to obtain the proper flow line for the pipe.” Those who received the new convenance were required to share the $25,000 bill.

The house at the corner of Willis and Montezuma was “remodeled into a thoroughly modern and up-to-date apartment house.” That project would cost $10,000. A Phoenix developer revealed that plans were being drawn up in Prescott for “two large business buildings costing $40,000 each.”

Even the Prescott Courier modernized in 1922 and was proud to publish a picture of their new Duplex printing press.

A great part of the reason for this growth spurt was the US government’s decision to turn the old Ft. Whipple grounds into the exclusive tuberculosis hospital for the Veterans’ Administration. A whopping $3.2 million (over $55 million today) was spent to make the transition. It would become the fourth largest hospital in the country and the largest tuberculosis hospital in the US. It also boasted the largest kitchen in Arizona feeding 1200 men three times a day. Fifteen cooks were in charge of several helpers each. The numerous white buildings seen there today were primarily built in 1922. The VA hospital had a monthly payroll of over $100,000 ($1.7 million today) to stimulate the Prescott economy.

“With all its paving activities, its rumors of new hotels, theaters, office buildings and its remodeling of present stores,” the paper observed, “Prescott is almost forgetting that the real sign and guarantee of a city’s growth lies in its homes…” From Whipple to Miller Valley 30 to 50 homes were in the process of construction. “The street without some kind of construction work going on is almost a rarity,”the paper remarked.

Streets were laid out and lots surveyed for the new Lincoln Park “suburb.” Seven houses were initially built and cost $1800 (about $31,000 today). These houses included a living room, kitchenette, bedroom, a sleeping porch, and bath. The homes sat on 50 x 150 foot lots. A mile of pipe was necessary to connect the homes to city water at a cost of $4800, (about $83,000 today.) 300 houses were expected to be built there.

The Pinecrest section was sprouting new homes as well. Indeed, “there have been enough new cottages, tent houses and bungalows built in the past few months that an old resident is astonished at the changes made there,” the paper reported. “The cottages stretch away until lost in the pine-clad hills.”

“The Chinese Gardens at the entrance of Miller Valley have moved,” and the land graded “preparatory to having it designated as an authorized sub-division of Prescott,” the paper announced. Some of these lots were improved with bungalows or a new type of inexpensive, smaller version called “bungalettes.” These were already popular in Phoenix and offered inexpensive housing for some of the new laborers in town. They sold for $1000 ($17,000 today.) These forerunners to “tiny-houses” offered only 480 square feet with one main living/bedroom, a kitchen, breakfast nook, and a single clothes closet. For an extra $600, one could add a bath and kitchen plumbing. 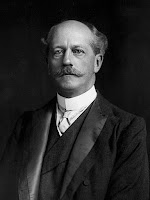 ALSO ENJOY: Founder of Lowell Observatory Got High in Prescott

The story of Percival Lowell's visit to Prescott, AZ in 1909.

With this influx of population, there was a need to expand schools and churches. Due to there being no additional land to expand the Washington school, a new school costing upwards of $40,000 (almost $700,000 today) was built “below Aubrey street, and Marina and Cortez streets” in March. The paper reported that the work was being “pushed as rapidly as possible.”

“In keeping with the spirit of progress that lately has been sweeping over Prescott," the paper proclaimed, "the Baptist congregation in this city has planned the erection of a new church on the plot already purchased by the church at the corner of Goodwyn and Marina streets.” It was hoped it would open by the end of the year.

The Christian Church, which was meeting in the Moose Hall, bought a lot for future expansion.

Of course, other basic needs were required for the influx of residents. After opening store No. 7 on North Cortez St. in the Spring the year before, the Pay ’N Take It grocery store planned on opening up a second, larger location which would include distribution for other stores in the area. It would “be No. 14, the unlucky 13 being eliminated,” the paper explained. The distribution post would serve a planned chain in northern Arizona that would soon include Jerome and Humboldt.

Even more importantly, Prescott’s water shortage would be solved with the erection of the Banning Creek dam which created (Lower) “Lake Goldwater.” It was early March when the plan passed. This would hold enough water for a five month supply. It “would be 65 feet high, 292 feet long, 45 feet wide at the base and 6 feet wide at the top.” A “temporary” road (which still exists for maintenance purposes) was built from Senator Highway to the lake site about a half mile away. The dam project would cost $350,000 (or $6 million today.)

Modernization also meant the latest technology, and Prescott was proud to sport the third radio station in Arizona and the first one outside of Phoenix. Nightly concerts (consisting mostly of setting a microphone in front of a Victrola) were broadcasted. Occasionally, Marsh Smith played his steel guitar live.

The studio was located in the Prescott Hotel and it was hoped that the lobby would be utilized for bands and singers to perform live. The Tilton Music shop partnered with the station to provide the latest music. “Frequently now when the local station is getting ready to quit for the night and announces, ‘The next number will be the last,’” the paper wrote, “somebody calls in over the telephone and says, ‘Don’t quit yet!’”

As the calendar slipped into 1923, that was Prescott’s sentiment towards modernization: Don’t quit yet!

(In order of appearance)