His name was Frank James Stephens. He was the son of a rancher and Mohave County supervisor, WB Stephens, who owned a ranch along the Sandy River. Frank had taken well to the ranching life and he was quickly developing into a genuine rodeo star.

His first appearance at Frontier Days in Prescott was in 1918 at age 21 and even as a rookie, he won third place prize money in the relay race.

Three months later his wife would give birth to their first child.

The following year, in 1919, in the “Steer Breakaway” contest, Stephens finished fourth, roping three steers in 35 seconds and winning $100 in prize money (worth about $1700 today.)

He began competing in all the area rodeos and was quickly making a name for himself.

At the first annual Labor Day Rodeo in Kingman in 1919, he took second place in the special event of goat roping and split first prize honors for best costume. 1920 started with a rodeo on Frank’s home turf of Sandy. He won second place in the burrow double-tying event, earning $160 (about $2700 today.)

Instead of going to the Prescott Frontier Days in 1920, he instead opted to perform at the Flagstaff rodeo the following week. He was smart to do so. There he won first place in bull roping earning $1200 (nearly $20,000 today) with his partner Lee Robinson. This year also saw the birth of the cowboy's second child.

When automobiles were first invented, it was inevitable that cowboys would try them on the range...sometimes with humorous results.

Later, his father lost his prize saddle in a fire in Oatman and the 1921 Frontier Days offered Frank an opportunity to make good on his dad’s loss. One prize that year was one of the finest saddles made. This year he would go all out for the saddle with the hope of giving it to his dad.

Unfortunately for Frank, the prize saddle was won by Van Dickson. However, after talking with Dickson, and explaining how he wanted to get the saddle for his father, the two decided to effect a trade. Frank gave Dickson a horse for the saddle and it was reported that “both men were satisfied.” This human interest story was popular and added to Frank’s growing fame on the rodeo circuit.

Then in late June 1922, Frank’s day job would change considerably. His father sold all of his ranch holdings along the Sandy river to George W McCain. McCain had ranches elsewhere in the Southwest and he hired the son, Frank, to manage the operation. It was a great opportunity for Frank, earning him a better wage for his growing family. They moved to Kingman just days before Frontier Days 1922 with the future looking bright.

At the rodeo, Frank had already finished in the money in the steer roping contest and was looking forward to the steer riding event--as was the crowd.

The gate opened and the animal stepped out of the chute and immediately doubled-up high in the air on its first buck. However, when it came back down, the beast lost its footing and fell forward. Frank was thrusted head-first to the ground, with the force fracturing his skull and flipping him on his back. Worse, the full weight of the animal's shoulders landed on his chest before it trotted away.

The crowd instantly became silent as Frank's wife ran down from the grandstand to attend to her husband. An ambulance was called and he was immediately taken to Prescott’s Mercy Hospital with his wife aboard. After a quick initial examination, it was declared that Frank would be alright. When this announcement was related to the crowd, the grandstand erupted in cheers for the young star and the rodeo continued merrily.

Frank's parents were immediately telegraphed and a family delegation was able to reach Prescott by noon, but Frank was still unconscious from the skull fracture. As the day wore-on, however, Frank’s condition grew worse. It was realized that he had suffered multiple internal injuries and there was nothing the doctors could do.

He died peacefully around 1:30 the next morning in the presence of his family, never regaining consciousness. He was only 25.

He left a wife and two young children; as well as his mother, father, four brothers and two sisters. “Needless to say that his folks are heartbroken at the untimely death of this young man, who was already making such a good start in life," the Mohave county paper lamented. "Their grief is shared by the people of Mohave county.”

The Frontier Days headquarters, staff, and indeed the rest of the Frontier Days event turned distraught and gloomy; for Frank P Stephens was the first contestant ever to lose his life at the World’s Oldest Rodeo.

A few weeks after the tragedy, Frank's family posted the following "Card of Thanks" in the Mohave County Miner and Our Mineral Wealth newspaper:

"To the Rodeo, Pardner!" 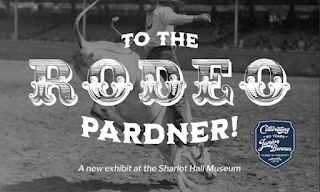 It includes the entire rodeo timeline history and special artifacts celebrating the 50th anniversary of the release of the movie "Junior Bonner" filmed in Prescott in 1971. (Also look for the saddle Van Dickson won in 1924!) 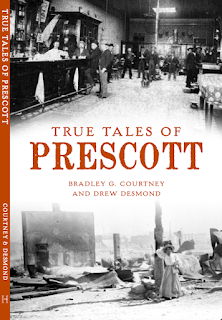 CLICK HERE for information on all of Drew's books!
Follow the blog in one of the following social media to be sure you get the latest article!