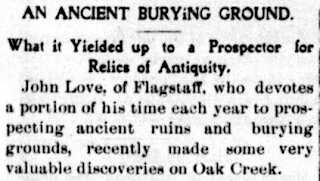 Meet John Love. In his day, at the turn of the last century, he was known as a “relics prospector.” Today he would easily be considered a grave robber. “Those who come in contact with him dub him queer, eccentric, etc., explaining that he was struck on the head in early youth by an iron bar and has suffered more or less seriously since,” the Arizona Republican reported. Still, the same paper also described him as “John Love, the well-known searcher for prehistoric relics…”He was a bit of a snowbird, living in Flagstaff until November when he would migrate to the Verde Valley and spend his time hunting for prehistoric artifacts. Unfortunately for us today, he was extremely successful at it, even wholesaling them. “The greater parts of his finds were held for sale at Babbitt Bros’ store in Flagstaff,” the paper announced.

By all accounts, innumerable quantities of arrowheads and worked turquoise passed through his hands. When his finds were out of the ordinary, they would receive newspaper coverage throughout the state. Yet in the winter of 1898-99 he would dig up one of the most remarkable grave sites in Yavapai County.

The exact location is difficult to discern from the newspaper accounts. It was described as being on Oak Creek near the property of Rudolph Willard. “Ancient ruins were found on a bluff about 200 feet above the burying ground [that] was underneath some projecting rocks which jutted out from the almost perpendicular walls of the mountain side, but had been filled in and covered over until these projecting rocks could not be seen,” the paper described.

“He dug up over 50 skeletons and a very large amount of pottery…in a well-preserved condition,” the Coconino Sun detailed. “Among other things found were innumerable arrowheads, a spear point 7.5 inches long, a lot of marlin spikes of various lengths and some paint, which was also well preserved, a hat woven out of bear grass, and a small piece of woven cloth, apparently a blanket.

“A great deal of the pottery, and particularly the larger pieces of it, crumbled upon being exposed to the air," the paper continued. "Some of it was unusually large, in fact much larger than anything discovered in this section, but it was found impossible to save them, although recovered in fairly good condition.

"A two-handled jug and several small bowls were well preserved," the paper continued. “One of these bowls was exceptional, as in holding it up between the fingers and then by thumping it with another finger, it had the ring of a genuine piece of modern chinaware.”

“Another well-preserved curiosity recovered was a dipper which was perfect. It was made of some black material, very much resembling slate. The handle was hollow and very hard. Mr. Love sold this dipper for $25,” (worth nearly $900 today,) “and values the articles taken out in two days work as being worth $100,” (or about $3500 today.)

ALSO ENJOY: The Hohokam Village Under the Cordes Junction Interchange

The story of the Hohokam archeological finds that existed under the Cordes Junction, I-17 interchange.

One of the skeletons dug up was of a giant. The skull measured 18 inches tall from the chin to the top. The jawbone measured a full 4 inches across. “Two tusks of unusual size protrude[d] from one of the jaws, but otherwise, the teeth [were] those of a human,” the Sun wrote. “The skull alone might easily be mistaken for that of some animal. As the bones of the body, however, were found with it, Mr. Love says there can be no mistake about it belonging to that of a human.”

With some degree of astonishment, this is the third separate newspaper article this blog has unearthed about the discovery of giants in Yavapai County! Interestingly, this is the first instance where one was buried among other, normal-sized humans.

Ultimately, Love was digging toward a wall he noticed against the mountain. When he got there, the really extraordinary discoveries were made. When the wall was exposed, it was discovered that it was masonry that “contained an opening over which was a thin stone slab.” When removed, it was found that a niche had been cut out of the mountain to form a burial chamber. The inside of the chamber had been plastered and with its masonry wall it was reported that the crypt had been “perfectly air tight.”

Inside were three small mummies all “well-preserved.” The tallest of these was four feet high with the shortest being two and a half feet tall. “They were apparently those of children,” The Republican related, “though some who saw them contend that they were those of grown persons, belonging to a pygmy race.”

Some of the items found in the crypt were similar to those found outside it. “A blanket was found wrapped about them; this being also in an excellent state of preservation, and unlike most articles of this kind, did not crumble when exposed to the air.” The portion of the blanket had been laying on the ground “was rotten, but the remainder was intact and quite strong. A string of beads, 36 inches long…crumbled when picked up,” but the beads remained in good condition.

Eventually it was decided that the two taller mummies at least, were fully developed, but it was unsure if the shortest one’s teeth had fully pushed through the gums or not. The tallest was a male and had a string of turquoise beads around his ankle. “Seashells at the head of each body [indicated] intercourse with coast people,” the Republican stated. “Two dozen large bowls decorated with fast colors—red, yellow, brown—and black, in design of moon, stars, etc., [with] a border like the greek work” were found. “The bowls weren’t heavy like the majority of ware found, but [was] thin and when struck gives a clear ring, like good china.”

“Turquoise was found in great profusion, three yards of beads being strung at one time.” Also inside the crypt was: “a cedar cross seven inches long, a pot of brown paint [that] had evaporated until there was nothing left but a powder, [and] a pitcher with handle and spout.”

“Other items of unusual value were also discovered,” the paper told, “and these, together with the finding of this walled chamber and its contents, leads to the belief that at this point was the residence of some great chief or king, as the ordinary burying places of the prehistoric people weren’t hewn out of the mountain and enclosed with airtight walls.”

By 1900, however, Love’s prospecting turned dry, and he eventually sold the rest of his collection, along with the three mummies, to Dr. SW Hart for an unknown price. Some of these items were found in the vicinity of property owned by someone named “Hart,” but it is not known if this was the same man. Eventually Dr. Hart moved to Denver, evidently taking the collection with him.

John Love gave up relic prospecting. He still would snowbird down to the Verde Valley during the winter months, but come spring he headed back to Flagstaff and grew an excellent reputation in his new career of house cleaning.

CLICK HERE for all the stories of GIANTS on the #PrescottAZHistory blog!

#PrescottAZHistory publishes a new article twice a month on Sundays. Follow the blog in one of the following social media to be sure you get the latest article!