When the first battle flag for these “cowboy soldiers,” was presented, it was addressed to, and received by Brodie. He retained this flag his entire life and its importance to him would be illustrated at his funeral.

Brodie was the only Rough Rider to attend West Point, graduating in 1870. “He was an active participant in various Indian campaigns and he had some lively encounters with the Modocs and (others.)”

“In 1871 he was especially commended for gallantry in action with the Apaches and was recommended for brevet (a promotion without a pay increase,) by General Crook for his service against the same….in 1872-73.”

From 1887 till 1890 Brodie worked as Superintendent and Chief Engineer of the Walnut Grove Dam, but he had public disagreements with ownership about the escalating cost of the project. The tab had already reached one million dollars—an immense amount of money in the 19th century, and owners started cutting back from Brodie’s plans.

Then, shortly before the dam was completed, a torrential rain caused it to fail in what is known as the worst natural disaster in Arizona history. Brodie’s previous public outcries for higher construction standards brought him immediate exoneration. Serendipitously, Brodie’s second wife, Mary Louise Hanlon, was a survivor of the dam failure as “all those about her,” including everyone in her family, perished.

RELATED: The Dam, The Drunk, & The Disaster
The complete, heartbreaking story of the Walnut Grove Dam Disaster of 1890 in Yavapai County. It is still regarded as the worst natural disaster in Arizona history.

Brodie continued his military service when he was appointed Commander of the 1st Regiment, National Guard of Arizona in 1891. He also served as Yavapai County Recorder from 1893-95 before co-founding the Rough Riders.

A newspaper recalled his gallant service during that conflict: “In the battle at Las Guasimas, during the advance of the American forces upon Santiago, Brodie was at the very front of the fight. He was one of the first American officers to be wounded, a Mauser bullet tearing a painful wound in his right arm.”

After the war, Brodie ran as a Republican for the Arizona Territorial Delegate to Congress campaigning with his wounded arm in a sling.  However, his well-respected name and his sympathetic condition were not enough to win in a territory then highly Democratic.

Despite this, his public service, particularly his leadership of the Rough Riders, brought him many accolades. In June 1899, Brodie was presented “a magnificent sword on behalf of the citizens of Las Vegas and the Rough Riders of New Mexico.”

With the assassination of President McKinley in 1901, Teddy Roosevelt became the youngest President in US history. At his inaugural, it was Col. Brodie who headed the detail of Rough Riders who served as the President’s bodyguards at the event. This act was repeated when Roosevelt returned to a celebratory parade after his trip to Africa in 1912. Roosevelt would depend on his respected friend for several tasks during his presidency.

In 1902 Roosevelt appointed Brodie 15th governor of the Arizona Territory. During this time, Brodie raised taxes on mining; expanded the Arizona Rangers from 14 to 26 men; and founded the site for the Roosevelt Dam.

However, two positions of Brodie’s proved particularly unpopular. First, when the legislature voted to allow women suffrage, Brodie vetoed it. Second, he supported New Mexico and Arizona joining the union as one state—a popular concept in New Mexico, but voted down in Arizona. One newspaper considered his political career to be over. It proved to be correct.

He resigned his post as governor when President Roosevelt appointed him Chief of the Record and Pension office in Washington DC.

Upon leaving Governor’s office, the Arizona Rangers presented him with a saddle that was “without a doubt the finest that ever came into Arizona.” It was made of hand-carved leather, exceptionally decorated, with “the sweat leather bearing the coat of arms of Arizona. On the back of the cantle (was) a plate bearing the inscription: “Presented to Alexander O. Brodie by the Arizona Rangers.” A handsome hair bridle was enclosed with the saddle.

Likewise, the Territorial Legislature “in appreciation of Major Brodie’s sterling qualities as a man and his unspotted career as a public officer, by unanimous vote agreed to present him with a sword and appropriated $500 for this purpose," the newspaper reported. “This is a remarkable testimonial of esteem from a body of men…nine-tenths of (whom are) of a different political faith.”

But only after a month at his new Washington post, Roosevelt changed his mind and sent Brodie to the Philippines to become Military Secretary of the islands.

After serving 2 years in there, he was ordered to take the post of Adjutant General of the Military Department of Minnesota where he served until his forced retirement from the military when he reached the age of 62. 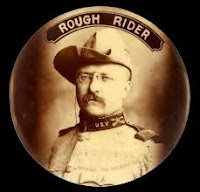 Brodie’s retirement from the army did not diminish his love and interest in the military. In 1913 with the department of defense, he started “an experimental military camp for students of educational institutions to be held at the Presidio of Monterey, CA” for 5 weeks during the summer. “The object sought,” one paper reported, “is not in any way one of military aggrandizement, but a means of meeting a vital need confronting a peaceful unmilitary, though warlike nation to preserve that desired peace and prosperity…”

Finally, Brodie retired to his hometown of Haddon Field, NJ, where he passed away May 10, 1918. “Quiet, but impressive were the funeral services at Arlington National Cemetery,” the paper reported. “On the casket…was draped the first flag of the Arizona Rough Riders.” It was held in place by “the sword presented to him by the citizens of Arizona upon the occasion of his retirement from the governorship.”

While the funeral took place in Washington, back in Arizona, “all departments of the state suspended business as a mark of respect to the man whose life was closely identified with the history of this state.”