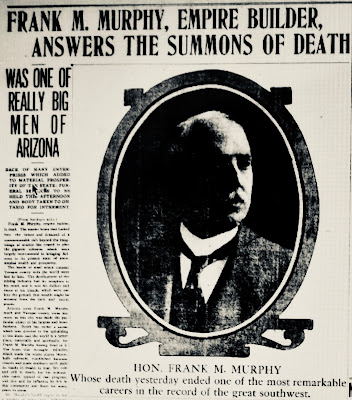 Frank Morrell Murphy first arrived in Prescott in 1877. "During the next 40 years he changed almost every aspect of life in Yavapai county. A financier, promoter, philanthropist, and empire builder, it was said that he brought more money into the Territory than any other one man."

Today few people are familiar with him. "This is probably because of the emphasis that Frank Murphy placed on his life. He promoted Prescott and Yavapai county; he promoted railroads (and) mines, but he did not promote (himself)."

"Death has ended a career which was devoted to the upbuilding of the State, and the world is a better place, materially and spiritually, for Frank M. Murphy having lived in it," the newspaper eulogized. "The brain that wrought miracles, which made the waste places bloom, built railroads, established summer resorts and made stubborn earth yield its vaults of wealth to man (has passed)."

"The bands of steel which connect Yavapai county with the world were laid by him. The development of the mining industry had its inception in his mind, and it was his dollars and those of his friends, which were put into the ground, that wealth might be wrested from the dark and secret places."

"Arizona owes Frank M. Murphy much and Yavapai county owes him more, as the city was made the particular object of his largess and benefactions."

"His first venture in Prescott was in the clothing and haberdashery business with the firm of Thomas Bray & Co." When he was elected to represent Arizona with an exhibit at the New Orleans World's Fair, it "worked a marvelous change" in him. "He had the opportunity to meet and become friendly with some men of national prominence, and the ties of business and personal friendship he formed at that time, enabled him to take a much bigger place in the life of his community and state when he returned..." 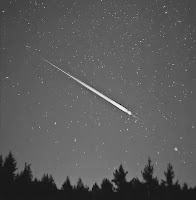 "Mining claimed his first interest outside of his own business in the city. He was associated with Sen. WA Clark on...the purchase of the United Verde Mine. Later, he induced Diamond Joe Reynolds, a millionaire investor...to buy the Congress Mine. The purchase of that property was the underlying cause of the construction of a north and south railway through Arizona." Infrastructure was built at the mine and soon the town of Congress, Arizona came into being.

Murphy realized that in order to make large scale mining possible, the Iron Horse would need to be implemented, and this would take large scale investment.

"He associated himself with some prominent financiers and in 1893, built the road from Ash Fork to Prescott and in the following two years completed the line south to Phoenix." This road was later sold to the Santa Fe forming the organization of the Santa Fe, Prescott and Phoenix Railway Co., and Murphy was named president.

In addition to building a depot near there, Murphy also helped finance the development of the Castle Hot Springs Hotel. He also helped form the Prescott National Bank and the Bashford-Burmister Co.

When it was feared that Ft. Whipple would be decommissioned, Murphy traveled to Washington and successfully lobbied for the "rehabilitation and re-garrison" of the fort--greatly helping the local economy.

Simply developing the land he loved for the benefit of all was not enough for Frank Murphy, however. His philanthropy was also renowned. If it weren't for Murphy's donation of the land, the Arizona Pioneers' Home would not have been located in Prescott. Other donations of land by Murphy for Prescott's good included:

It seemed that Murphy took every opportunity to do good for his community. High school graduates were treated to a free trip to the Grand Canyon. He would provide hundreds of turkeys for his employees at Christmas. "Public spirit was personified in this man, who...has done so many things (for Prescott), that it will probably never be possible to mention them all," the paper wrote.

Although a complete biography would require a book, Frank Morrell Murphy is a man worth remembering.